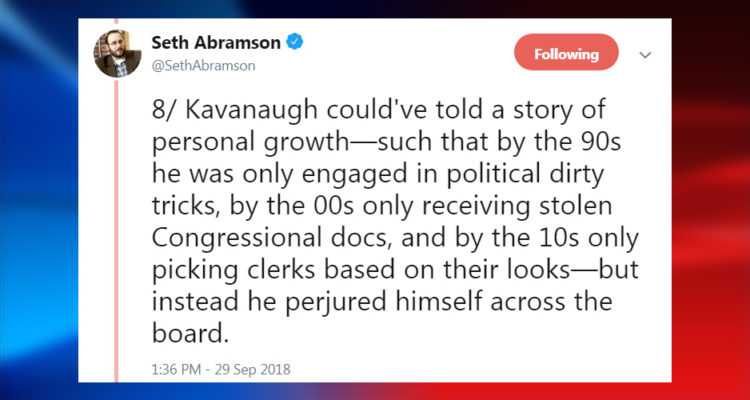 Republicans hoping to confirm Brett Kavanaugh in this lifetime get a healthy dose of reality from former criminal investigator and criminal defense attorney Seth Abramson.

If you are like me, you have spent most of the week watching the stunning drama play out surrounding Republican efforts to confirm Trump’s Supreme Court nominee, Brett Kavanaugh.

Through it all, former criminal investigator and criminal defense attorney Seth Abramson has remained my go-to person in regards to the legal aspects surrounding that controversy.

His online bio notes that:

In short, I consider him to be highly credible, as does that impressive list of media outlets, above.

Abramson weighed in on the recent allegations lodged against Kavanaugh, making a compelling argument that there is more than enough circumstantial – and factual – evidence to justify denying him confirmation to a lifetime appointment to the country’s highest court.

Was there "sexual license" at the huge Georgetown Prep parties Kavanaugh attended in the 1980s, as Julie Swetnick alleged? Well, here's what the headmasters at GP and other area prep schools wrote, per The Washington Post, at the end of the 1980s. (h/t DM) https://t.co/aHYSIklBeJ

Abramson began his latest thread with a link to an article by The Washington Post and the following narrative in his introductory tweet:

Abramson dedicated the bulk of the remainder of this thread detailing Kavanaugh’s alleged lies, explaining that:

Of all his recent tweets regarding Kavanaugh, the following one stands out as it succinctly summarizes matters:

It is just me, or does he seem incapable of telling the truth?

Does that remind you of anyone?