September 12, 2018 by Brandon Weber No Comments 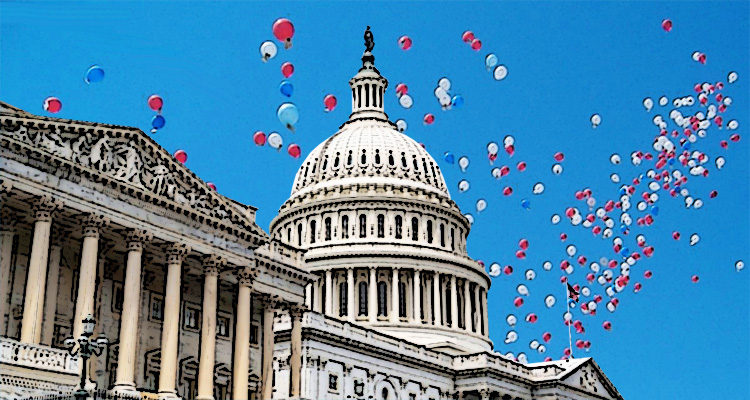 Here are but a few of the liberal victories that improved our country in the last 200 years — some after rather massive battles.

If you look at the record … it’s clear that eventually, inevitably, Liberals always win. Even with the recent unpleasantness.

Don’t believe me? Check out a few examples of liberal accomplishments the last couple of hundred years.

—The end of slavery in the United States

Yes, it was a Republican (Lincoln) that ultimately made it happen, partly because he was against slavery and partly because it was a knife to the heart of the Confederacy. But guess what? Lincoln was a Liberal Republican. And yes, the party has gone to the other end of the spectrum since. Dog Rest Its Soul. Not really …

—The right to vote

For women (1920), African Americans (1869 and then 1965), and 18-year-olds during the Vietnam war (largely because young men were being drafted at 18 but could not vote at 18), these were hard-fought victories. Getting to actually use those rights was something else entirely, and would take decades or longer for some.

Encompassing 5 years during the country’s Great Depression, 1933-1938, it started with what historians called “The 3 R’s” — Relief for unemployed workers and the poor, Recovery of the economy to normal levels, and Reform of the financial institutions to try and prevent another depression.

Throughout the nation men and women, forgotten in the political philosophy of the Government, look to us here for guidance and for more equitable opportunity to share in the distribution of national wealth… I pledge myself to a new deal for the American people. This is more than a political campaign. It is a call to arms. — FDR

What’s more, it worked: FDR’s first term featured one of the fastest GDP growths in history.

One of the signature pieces of legislation that FDR got locked into place was the Social Security Act of 1935. It was sorely needed at a time during the Great Depression when the poverty rate for senior citizens surpassed 50%. It included not just Social Security for the elderly, but also benefits for widows (especially those with children), and it featured unemployment benefits, Aid to Families with Dependent Children (the original “welfare” program that today is known as Temporary Assistance for Needy Families), and many other progressive reforms.

Much like anything that was good for common everyday working people, the right wing called it “socialism,” but it passed.

On the heels of the robber barons of the late 1800s and early 1900s, as well as child labor, 16-hour workdays, and the Great Depression, the working class was beginning to exercise the power of collective action in the form of labor unions. And it used its muscle to pressure legislators into codifying the right to join unions into law. That appeared in the form of the Wagner Act of 1935, which was widely seen as a way to quiet some of the strife that caused frequent work stoppages and sometimes even violence against strikebreakers. The National Labor Relations Act (The Wagner Act) gave working people the right to form unions, collectively bargain for improvements in the factories and shops they worked in, and much more. It was opposed by big business, of course, as “communism.”

After it took just 6 months to wind its way through Congress, Franklin Delano Roosevelt happily signed the act in July of 1935 and gave unions a way to organize like never before. Did it work? The nation hasn’t seen a wave of union organizing quite like it since, peaking at 35% of the workforce being members of unions in 1945.

This part of the New Deal included the Fair Labor Standards Act, which eliminated child labor, created a minimum wage, and provided overtime for work past 8 hours/day and 40 hours/week. Also, the Works Progress Administration and Public Works Administration were created as well, which meant work to be done by hard workers who had been jobless for too long — it made the federal government the largest employer in the country for a while. But it created good jobs for people who were desperate for work; and it put paychecks in the hands of millions, as well as creating roads, schools, hospitals, bridges, and national parks in the process. Farm and rural programs were also created to employ desperate people who tended the land.

Also passed were various banking reforms to prevent a similar depression from happening, creating the Federal Reserve to guarantee bank deposits, and laws regarding securities to regulate the stock market. (Odd, I could swear our national conversation has gone through exactly this after the Great Recession. History: Live it, rinse, repeat!)

(This also included a repeal of Prohibition, which meant the beer flowed freely. No wonder FDR was so popular, and elected to 4 terms in a row!)

The Civil Rights Act was initially a bit weak because it failed to protect minorities from employment discrimination, and — notably, given what’s been happening in our time — police brutality; both pieces of legislation were improved in the years following. But it was a direct result of the activists and citizens who hit the streets in Montgomery, and Selma, and Birmingham, and Memphis, and Wichita, and Albany that both of these happened.

—The right of interracial couples to marry

With the landmark 1967 Supreme Court case Loving V. Virginia, it was finally the right of all mixed-race couples to be married. And that has not changed since. Which led to #7 below.

Look, could it have been better if it were single payer, sure. But it covered approximately 16 million people that didn’t have insurance before, and it changed the entire health care picture for those with pre-existing conditions and for young people up to 26 years of age. It’s got a ways to go, and yes, needs some improvements — leading up to single payer, perhaps — but it was definitely a Big Effing Deal, as quipped by Vice President Biden upon its signing. It will likely be changed dramatically by the Orange Ogre and his Posse, and they’ll call it Trumpcare (ewwww) or something like it, but a permutation of it will remain, and likely be improved once we get back on track to making this country great again after 2020. With luck, maybe 2018 with a massive blue wave during the midterm elections.

—Marriage equality for all

Y’all lived it. It’s real, it happened fast, and it’s not going away without a massive, in-the-streets battle. The result of millions of efforts by LGBTQ activists and their straight allies across the country, culminating in June of 2015 … it happened.

On almost every one of these, it’s unlikely to change back, unless we really do head to the 1950s, like some would want us to do. Flat out resistance and throwing down in the streets will probably be necessary.

What other big victories have we accomplished, fellow Progressives?

And for Conservatives … what has the CommiePinkoLeft succeeded in getting passed that really burns your britches?

Let us know in the comments!