Whoops! Kavanaugh Himself Appears To Admit A Key Element Of Ford’s Accusation 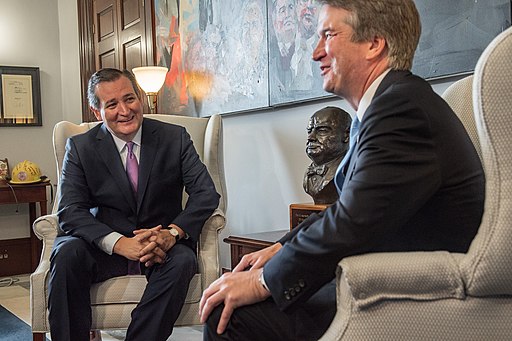 Brett Kavanaugh appears to have confirmed a key element regarding Christine Blasey Ford’s accusation while attempting to spin the matter during a Monday appearance on Fox News.

CNN covered the Monday night Fox News interview with Brett Kavanaugh, reporting that: “He [Kavanaugh] said he did not remember being at any parties with her, but allowed for the possibility they may have crossed paths.

“I may have met her,” he admitted, adding: “We did not travel in the same social circles. She was not a friend, not someone I knew.”

Former criminal investigator and criminal defense attorney Seth Abramson weighed in on that stunning admission as part of a Twitter thread discussing the totality of the Fox News interview.

Abramson began the thread discussing the fact that Kavanaugh’s admission suggests that Ford’s claim that they met at a party is true.

“Kavanaugh now says, of Dr. Ford, that he ‘may have met her’ (Fox News). But given that they went to different schools, and given *when* they were at those schools, doesn’t that suggest that if they did meet it was, uh… at a party in the early eighties, exactly as Ford has said?” Abramson tweeted.

Abramson added that:  Kavanaugh “hedged about meeting her, which is odd, as it’s unclear in what other setting but a party he’d ever think himself to have encountered her. She says it was ONLY that party, so it’s not like he HAS to hedge his bets that way, i.e. she’s not going to suddenly say, ‘At church!'”

Continuing, Abramson discussed Kavanaugh’s admission through his perspective as a former criminal investigator.

After some side observations regarding Kavanaugh’s defense strategy, Abramson returned to the top of the investigative value of Kavanaugh’s interview:

Abramson concluded his analysis with a link to the Fox News interview and the following remark:

12/ Watch the FNC interview (below) for yourself and see how robotic and false and canned and over-coached he seems. His answers on his Yale frat are *so implausible* as to be actually offensive. No one would watch this and think he was being candid. /end https://t.co/BdK4ySrf1S

As a side note, CNN reported Tuesday morning that “Brett Kavanaugh’s prep team says the interview on Fox News last night is a success as they work to put the Supreme Court nominee in a stronger position before Thursday’s hearing.”

That’s according to a senior White House official who says there continues to be confidence among members of Kavanaugh’s team that ongoing preparations for the hearing are also going well.

Another source involved in the process the Kavanaugh camp believes that the judge and his wife “more than accomplished” what they set out to do, (The source said goals included making Kavanaugh and his wife come across as “sincere and sympathetic.”).

“Brett did a great job of holding back his contempt for the process, but you could see in his eyes that all of this has been excruciating and exhausting for his whole family,” the source added. “There comes a point when you can only sit there and take it for so long, and they showed the public they’re real people — not just names — who’ve been dragged through the mud.”