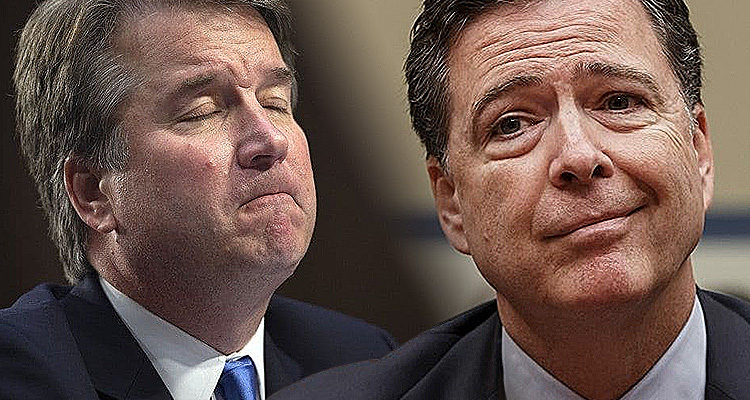 James Comey weighs in on the controversy surrounding Supreme Court nominee Brett Kavanaugh and the decision last Friday to order an FBI investigation.

Titled “The F.B.I. Can Do This,” Comey began by noting that “Despite limitations and partisan attacks, the bureau can find out a lot about the Kavanaugh accusations in a week.”

Comey began his article, discussing the current political environment, writing that “Trump’s decision to order a one-week investigation into sexual assault allegations against Brett Kavanaugh, his Supreme Court nominee, comes in a time of almost indescribable pain and anger, lies and attacks.”

Most disturbingly, we live in a world where millions of Republicans and their representatives think nearly everything in the previous paragraph is O.K.

Turning his attention to the FBI investigation, he wrote that the restrictions placed on the FBI were not going to work out the way Republicans have hoped they will:

If truth were the only goal, there would be no clock, and the investigation wouldn’t have been sought after the Senate Judiciary Committee already endorsed the nominee. Instead, it seems that the Republican goal is to be able to say there was an investigation and it didn’t change their view, while the Democrats hope for incriminating evidence to derail the nominee.

Although the process is deeply flawed, and apparently designed to thwart the fact-gathering process, the F.B.I. is up for this. It’s not as hard as Republicans hope it will be. [emphasis added]

Speaking to the reliability of Dr. Christine Blasey Ford as a witness, Comey contradicted the standard response by Republicans and Kavanaugh defenders that since the alleged assault happened 36 years ago, her memory is somehow flawed.

Yes, the alleged incident occurred 36 years ago. But F.B.I. agents know time has very little to do with memory. They know every married person remembers the weather on their wedding day, no matter how long ago. Significance drives memory.

They also know that little lies point to bigger lies. They know that obvious lies by the nominee about the meaning of words in a yearbook are a flashing signal to dig deeper.

Once they start interviewing, every witness knows the consequences. It is one thing to have your lawyer submit a statement on your behalf. It is a very different thing to sit across from two F.B.I. special agents and answer their relentless questions. Of course, the bureau won’t have subpoena power, only the ability to knock on doors and ask questions. But most people will speak to them. Refusal to do so is its own kind of statement. [emphasis added]

There is one passage in his article that does raise concerns for Democrats and those opposed to Kavanaugh’s confirmation.

F.B.I. agents are experts at interviewing people and quickly dispatching leads to their colleagues around the world to follow with additional interviews. Unless limited in some way by the Trump administration, they can speak to scores of people in a few days, if necessary. [emphasis added]

As Business Insider reported on Monday,

[M]ultiple media reports this weekend have suggested that the FBI’s inquiry is far more constrained than previously known.

Initially, Republicans set just two parameters: that the investigation had to be complete in under a week, and that it had to be limited to “current credible” allegations against Kavanaugh.

But on Saturday, NBC News and The Times reported that the White House and Senate Republicans gave the FBI a list of just four witnesses to interview. Investigators are also reportedly barred from pulling records that could be critical to corroborating parts of the testimony given by Dr. Christine Blasey Ford, who says Kavanaugh sexually assaulted her in 1982, to the Senate Judiciary Committee earlier this week.

It’s unclear how deep the FBI will be able to dig, however, given the additional limits that have been placed on the scope of the investigation.

“There isn’t a finder of fact in the country that would hamstring investigators like this,” said Jeffrey Cramer, a longtime former federal prosecutor in Chicago. “It would be comical if it wasn’t so important.”