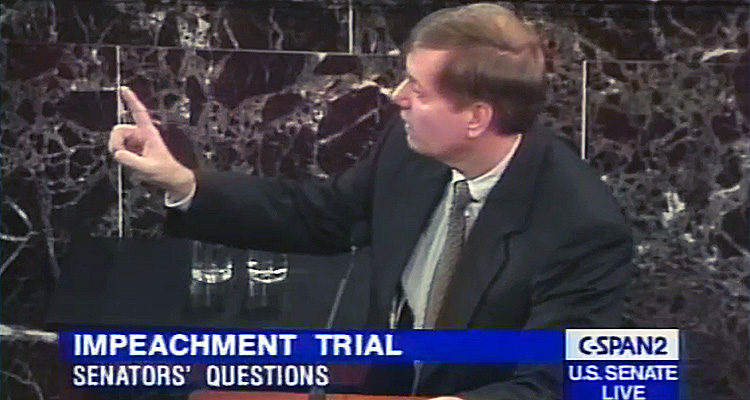 Lindsey Graham gets called out for his hypocrisy when it comes to judicial ethics and what is – and is not – acceptable behavior by a judge.

Vox reported on Graham’s behavior during the Thursday hearing, reporting:

After hours of emotional testimony from both Christine Blasey Ford and Brett Kavanaugh Thursday, Sen. Lindsey Graham (R-SC) was ready to take a stand — and become Kavanaugh’s most impassioned Republican defender.

In a lengthy, often-shouted statement, Graham declared that Democrats wanted to “destroy this guy’s life” and put him through “hell,” called Kavanaugh’s treatment “crap,” dubbed the hearing “the most unethical sham since I’ve been in politics,” and said Republicans who vote no would be “legitimizing the most despicable thing I have seen.”

Former criminal investigator and criminal defense attorney Seth Abramson weighed in on the apparent hypocrisy of Graham’s stance regarding Kavanaugh’s nomination in a Monday morning post.

“NOTE: On January 23, 1999, Lindsey Graham told the United States Senate that if a judge commits perjury *even once* he must be immediately impeached. See the video below at 3 minutes, 18 seconds. Either Graham was lying then or he’s lying now,” he tweeted, including a link to a clip on C-Span showing his remarks.

NOTE: On January 23, 1999, Lindsey Graham told the United States Senate that if a judge commits perjury *even once* he must be immediately impeached. See the video at below at 3 minutes, 18 seconds. Either Graham was lying then or he's lying now. (h/t DM) https://t.co/ZJ6iTXYj2g

As a matter of background, a South Carolina newspaper,The State, reported earlier this year that: “In 1999, Graham was one of the prosecutors in the House of Representatives’ case for removing Clinton from office after he was impeached over the Monica Lewinsky affair. (Graham was elected to the U.S. Senate from South Carolina in 2002.)”

The clip, referenced by Abramson in his tweet, is from Day Two of Senators’ questions to prosecutors from the House of Representatives (called House Managers). The question noted below, was question #59 of 105 total questions.

The Washington Post published a transcript of the Clinton impeachment hearing, to include question #59:

The CHIEF JUSTICE [William Rehnquist]. This question is from Senators Kohl and Edwards. To whom is it addressed? Oh, it is to the House managers:

Graham began his response stating: “Absolutely. And this is a hard case in a couple of areas, and I think it is an easy case in many areas.”

Continuing, Graham referenced a federal judge who had been removed from the bench for committing perjury.

The Constitution reads that upon conviction, the person shall be removed. You have to put it in the context of the judge cases, because that is where it gets to be hard for this body. Because of the precedents of the body when you apply the same legal standard of high crimes and misdemeanors to the fact that a judge who was convicted of perjury was removed by the body, and you conclude in your mind that the President committed perjury, you have a dynamic you have to work through.

After discussing particulars related to Bill Clinton, Graham made the following remark about judges found to have committed perjury – which is the “smoking gun” referenced by Abramson in his tweet:

I think it is important for this body to not have a disposition plan that doesn’t take in consideration the good of this Nation. I have argued to you that when you found that a judge was a perjurer, you couldn’t in good conscience send him back in the courtroom because everybody that came in that courtroom thereafter would have a real serious doubt.

Possibly more damning, is Graham’s statement on Constitutional law, given exactly a week before on January 16, 1999.

The relevant portion of those remarks were his final statement to the Senate:

Remember how you felt when you knew that judge had gotten so out of bounds that you couldn’t put him back in court even though it was unrelated to his court because you’d be doing a disservice to the citizens that would come before him?

You couldn’t live with yourself knowing that you were going to leave a perjuring judge on the bench. Ladies and gentlemen, as hard as it may be for the same reasons, cleanse this office. The vice president will be waiting outside the doors of this chamber. Our constitutional system is simple and it’s genius all at the same time.