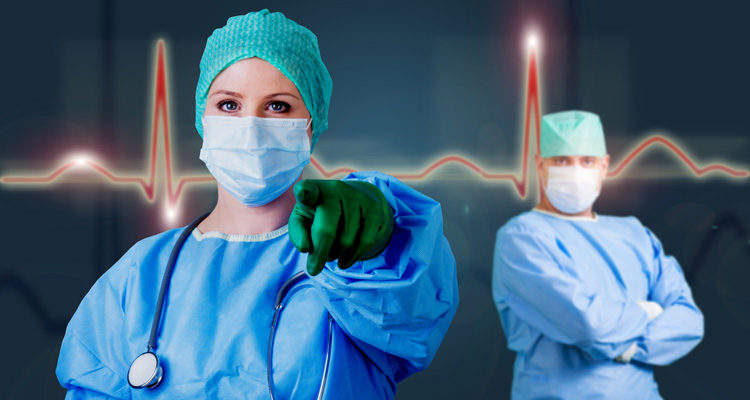 The response was swift, furious, and viral when the NRA told doctors to mind their own business.

The Annals of Internal Medicine, an academic journal published by the American College of Physicians (ACP), published a position paper in October 2018 discussing the need to reduce firearm injuries and deaths in the United States.[1]

The position paper detailed ten “position statements and recommendations,” which included a statement of support for “appropriate regulation of the purchase of legal firearms,” and for the “enactment of legislation to ban the manufacture, sale, transfer, and subsequent ownership for civilian use of semiautomatic firearms that are designed to increase their rapid killing capacity (often called “assault weapons”) and large-capacity magazines, and retaining the current ban on automatic weapons for civilian use.”[2]

Eight days later, the NRA reacted on Twitter by posting a link to an article published by its Institute of Legislative Action. targeting the position paper published by the American College of Physicians.

“Someone should tell self-important anti-gun doctors to stay in their lane. Half of the articles in Annals of Internal Medicine are pushing for gun control. Most upsetting, however, the medical community seems to have consulted NO ONE but themselves.,” the NRA tweeted.

Someone should tell self-important anti-gun doctors to stay in their lane. Half of the articles in Annals of Internal Medicine are pushing for gun control. Most upsetting, however, the medical community seems to have consulted NO ONE but themselves. https://t.co/oCR3uiLtS7

Reaction by doctors was swift, furious and at times went viral

As one might expect, doctors were quick to react with the BBC reporting: “When America’s powerful pro-gun group told doctors to mind their own business, the response was swift, furious and viral.”

Noting that the Wednesday tweet by the NRA, “went out hours before a gunman walked into the Borderline Bar & Grill in Thousand Oaks, California, and killed at least 12 people before turning his gun on himself,” CNN reported that although the tweet received “over 1300 likes” by Thursday, it also “riled up people inside and outside the medical field, who replied by the thousands.”

Below are a few noteworthy examples of Twitter responses by doctors courtesy of BBC and CNN:

Doctors tell the media they are not anti-gun, they are anti-gun violence

As The New York Times reported, doctors dispute the notion that they are anti-gun.

“Annals of Internal Medicine is not anti-gun; we are anti-bullet holes in people,” Dr. Christine Laine, the editor in chief of Annals of Internal Medicine, said in a statement to The New York Times. “And if we are biased, the bias is toward counseling our patients to reduce their risk of firearm injury and toward evidence-based solutions to the public health crisis that firearm injury has become.”

“Doctors are not at war with the NRA,” said Heather Sher, a radiologist who has worked in Level 1 trauma centers for almost 17 years and has cared for patients with gunshot wounds from two separate mass shootings. Sher gained prominence after the Parkland, Fla., school shooting when she published an article in the Atlantic about the damage caused by high-velocity bullets from a semiautomatic rifle, which was unlike any handgun injury she had seen.

Dr. Judy Melinek, a forsenic pathologist in California and the CEO of PathologyExpert, Inc., offered an enlightening response to the controversy in an article published by Vox which elaborated on an earlier tweet:

Do you have any idea how many bullets I pull out of corpses weekly? This isn’t just my lane. It’s my fucking highway. https://t.co/48S9UIFaV2

In her article she offered the following background info:

I am a forensic pathologist who has investigated gun deaths for my entire career. I am the one who gets called out to the death scene at 2 am. I am the one who stands behind the cordon line, across the yellow tape from the shocked faces of the decedent’s neighbors, friends, next of kin… In 17 years on the job, I have performed more than 300 autopsies on gunshot wound victims. About half are homicides and the other half suicides, while a small number are accidents. One day I did five autopsies — an entire family — after a man shot his three children, his wife, and himself. In the course of another autopsy, of a man who was shot by the police after pointing his gun at them, I examined and documented 43 gunshot trajectories. That postmortem took me four days.

In her concluding remarks, she discussed the need for medical professionals to speak out about firearm regulations:

Car crashes used to kill a lot more Americans before doctors, including my fellow forensic pathologists, advocated for government regulation of the auto industry, mandating the use of safety restraints and airbags. Those regulations save lives.

Lung cancer deaths used to be epidemic. Cigarettes are still the leading cause of preventable death in the United States, but our excess mortality rate from smoking has plummeted in the wake of legislation. It was doctors who spearheaded this effort to limit the exposure of teenagers to tobacco — legislation that has resulted in decreased smoking rates in every state where it has been implemented.

As scientists and caregivers, we doctors are in a unique position to understand the scale of human suffering caused by guns. We are driven both by data and by an intense feeling of personal responsibility toward those in our care. Gun deaths get the most media attention following a mass-fatality incident, such as in Parkland, Las Vegas, Pittsburgh, or Thousand Oaks. The daily carnage we witness in hospitals and morgues is often overlooked, but it happens everywhere, to every group of Americans, and leaves our patients and their families with an accumulation of broken bodies, coffins, and grief.

We have to do something. Doctors took on the auto industry and big tobacco on behalf of our patients. We didn’t choose this fight, but we if we have to, we can take on the NRA.

FOOTNOTE 1: The abstract of that position paper began by stating that

For more than 20 years, the American College of Physicians (ACP) has advocated for the need to address firearm-related injuries and deaths in the United States. Yet, firearm violence continues to be a public health crisis that requires the nation’s immediate attention.

The ACP is concerned about not only the alarming number of mass shootings in the United States but also the daily toll of firearm violence in neighborhoods, homes, workplaces, and public and private places across the country.

FOOTNOTE 2: Six of the ACP Position Statements and Recommendations were “reaffirmations of existing ACP policy,” to include the following two examples:

1. The American College of Physicians recommends a public health approach to firearms-related violence and the prevention of firearm injuries and deaths.

2. The medical profession has a special responsibility to speak out on prevention of firearm-related injuries and deaths, just as physicians have spoken out on other public health issues. Physicians should counsel patients on the risk of having firearms in the home, particularly when children, adolescents, people with dementia, people with mental illnesses, people with substance use disorders, or others who are at increased risk of harming themselves or others are present.

The remaining for positions and recommendations “represent new or revised policy:”

3. The American College of Physicians supports appropriate regulation of the purchase of legal firearms to reduce firearms-related injuries and deaths. The College acknowledges that any such regulations must be consistent with the Supreme Court ruling establishing that individual ownership of firearms is a constitutional right under the Second Amendment of the Bill of Rights.

5. Firearm owners should adhere to best practices to reduce the risk of accidental or intentional injuries or deaths from firearms. They should ensure that their firearms cannot be accessed by children, adolescents, people with dementia, people with substance use disorders, and the subset of people with serious mental illnesses that are associated with greater risk of harming themselves and others. ACP supports child access prevention laws that hold firearm owners accountable for the safe storage of firearms. Firearm owners should report the theft or loss of their firearm within 72 hours of becoming aware of its loss.

7. The College favors enactment of legislation to ban the manufacture, sale, transfer, and subsequent ownership for civilian use of semiautomatic firearms that are designed to increase their rapid killing capacity (often called “assault weapons”) and large-capacity magazines, and retaining the current ban on automatic weapons for civilian use.

10. ACP supports the enactment of extreme risk protection order (ERPO) laws which allow family members and law enforcement officers to petition a court to temporarily remove firearms from individuals who are determined to be at imminent risk of harming themselves or others while providing due process protections. [emphasis added.]