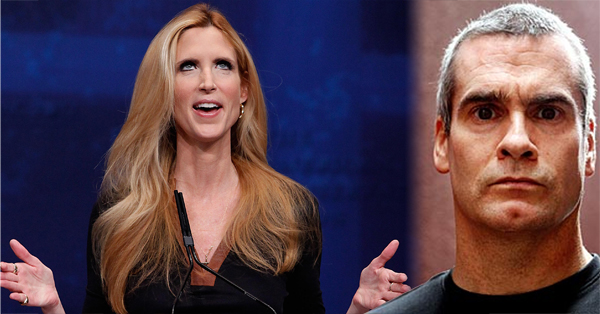 Henry Rollins is an American spoken word artist, writer, journalist, publisher, actor, radio DJ, activist and former singer-songwriter.  Many of you may remember him as the front man for the California punk rock band Black Flag, or from his television series The Henry Rollins Show.

Rollins has also hosted MTV’s 120 Minutes, and Jackass, enjoyed a recurring dramatic role in the second season of Sons of Anarchy and has also had roles in several films. Rollins has also campaigned for various political causes in the United States, including promoting LGBT rights, World Hunger Relief, an end to war and has toured overseas with the  USO (United Service Organizations) to entertain American troops.

A few years ago, as part of his Henry Rollins Show project he created a series of letters to include the one below to ultra right-wing conservative author, journalist and pundit Ann Coulter.

You can check out his current projects on the Henry Rollins website and you can enjoy the ‘Letter to Ann Couter’ video below: