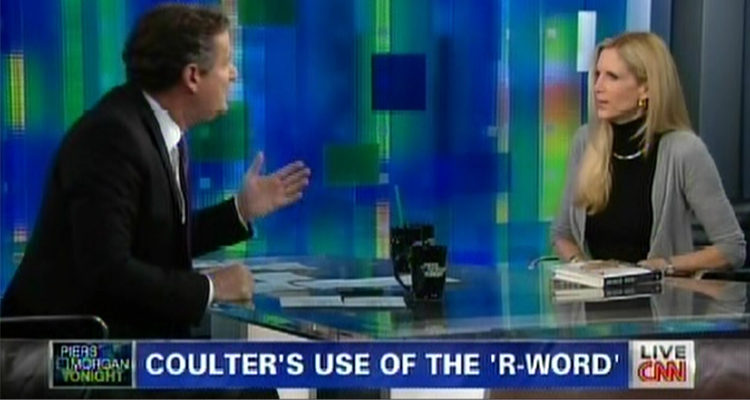 We have seen several individuals blasting Ann Coulter, but never like this.

Piers Morgan set up Ann Coulter for total humiliation back in 2012 over her Tweet calling President Obama a “retard”.

We have seen Coulter ripped apart many times over the years, but this time is unique as Piers Morgan completely set her up by enticing her into a strong defense of her statement before dismissing her from the show and bringing on a couple of guests do show just how ridiculous and bigoted her comments actually was…

As YouTube user Polititick posted the clip at the time, writing: “On Friday, October 26, 2012, Ann Coulter appears on Piers Morgan’s CNN Program. The verbal exchange is interesting, to say the least, but most interesting is how Piers set Ann up for an indefensible character assassination in the end.”

It’s unclear exactly what Polititick meant by “indefensible” but we are going to interpret it as meaning his destruction of Ann Coulter was so complete there was no way she could defend herself against it.

As CNN reported at the time: “the always controversial Ann Coulter refused to apologize for calling President Barack Obama ‘the retard’ on Twitter.”

A determined Piers Morgan tried his best to pull an apology from the defiant Coulter who insisted she had nothing to apologize for since her remark was not directed at the community of mentally disabled individuals who were offended by the tweet. “I was not referring to someone with Down syndrome,” said Coulter. “I was referring to the president of the United States.”

“I didn’t call the president a Down syndrome child,” Coulter continued, adding: “I used the word retard the same way people use idiot, cretin, moron and the rest of them which were all once technical terms and I had it with the language police.”

You can watch the humiliation in living color, below: