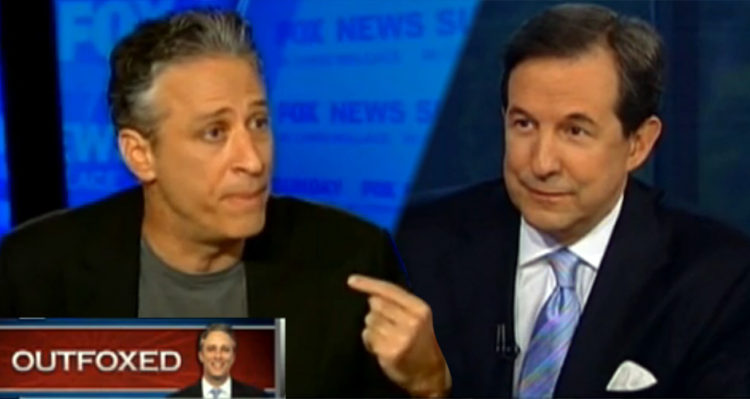 Jon Stewart and Chris Wallace do battle on Fox News over Sarah Palin.

Fox News host Chris Wallace brought up a comparison Jon Stewart made between a Sarah Palin ad and one for Valtrex, a herpes medication during a contentious interview on Fox News back in June 2011.

Wallace asked Stewart about the political motivation behind the comparison and Stewart called him out, reminding Wallace that he is a comedian first and foremost.

At one point Stewart called Wallace insane for thinking that he was making a literal comparison between the two.

Chris Matthews and his panelist, David Corn the Washington Bureau Chief for Mother Jones, discussed the clash during an of NBC’s “Hardball” aired the following night.

Matthews began, noting: “Coming up, we got a real prize fight here and it’s somewhat imbalanced. Jon Stewart smashing his way through Chris Wallace’s face to make a point. It is brutal fight. What an assault against Fox that he led Sunday morning.”

Corn replied: “My advice to Chris Wallace is never try to outwit a true wit, which is Jon Stewart. I mean, Chris didn’t look like he brought the ammo to this fight at the O.K. Corral, which he was trying to wage.”

“He wielded a Howitzer,” Matthews answered.

Talking about the fact that Wallace was clearly outmatched by Stewart, Corn stated: “He’s up against Mark Twain. Would you get on Mark Twain’s case for being tough on slave owners in the south? I mean, I thought it was like two different worlds colliding and Chris didn’t look like he had a foot in either one.”

Matthews chimed in, remarking: “You know, Alex, I was waiting- he was thinking that Jon was going to say, yeah, you got me on that, yeah, you’re right and I’m wrong. Fox is right. I’m wrong. It was- He was pretty smart in responding to him with nuance. Give me a break. Did I say herpes was the same as Sarah Palin? You’re the one that picked up on that.”

Continuing, Matthews noted that it was not wise for Wallace to try to challenge Stewart one-on-one: “Jon Stewart, whatever you think of his politics, and I think he’s generally right, he’s so frickin’ smart that you cannot take him on mano-a-mano.”

Comparing Stewart and Wallace, Corn added: “I think that Jon Stewart just said you can’t touch me. I mean, it was like watching a ballet dancer and IRS tax auditor. I mean, there was no competition here. He said you can’t conceive of my world. You don’t understand me. You think you know me. But you have no clue.”

Matthews concluded, saying “Let’s try to explicate this poetry. It seems to me that Jon Stewart is saying in his defense or offense my number one goal is entertainment. My number two goal, which I have, is to make a point.”

You can watch the clip below along with commentary by Chris Matthews and his panelists, David Corn the Washington Bureau Chief for Mother Jones and MSNBC Analyst Alex Wagner.