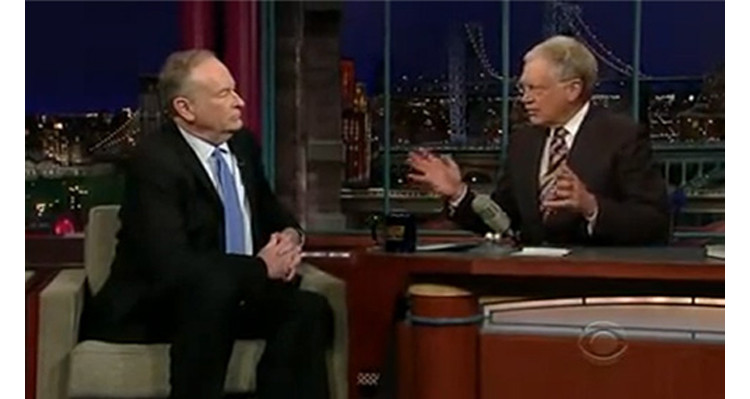 Late Night host David Letterman called Bill OReilly a goon to his face and lamented that anyone’s sweet innocent child could grow up to be such a person. (March 31, 2009 ) And don’t forget that the two have a history. Of particular note, Letterman told Bill O’Reilly in 2006 that “about 60 percent of what you say is crap.”

From the beginning of the show, Letterman was on the attack saying: “I wish I was smart enough to make him look ridiculous… He’s going to come out here all puffed up.”

Here are some of the highlights from the show.

DAVID LETTERMAN (holding up O’Reilly’s book): I want to tell you and this book is a crazy best seller. How many weeks has it been on the best seller list?

David pokes more fun at O’Reilly telling him that he never watches his show.

O’REILLY: I’m going to send over some tapes so you can watch the show and know what the hell is going on. Alright?

LETTERMAN: I have no idea. I can’t find the show. I don’t know where it is.

O’REILLY: If you have watched the show you would be much smarter.

LETTERMAN: I can’t stay up that late.

The two of them also talked at length about Rush Limbaugh during the interview.

LETTERMAN: He’s tubby. For a long time he had his housekeeper buy him illegal drugs…

O’REILLY: Do you really think it’s nice to do that to Limbaugh? I mean really. This is a serious question. They set him up as a strawman. Nobody takes this seriously.

LETTERMAN: I think he set himself up.

You can watch the two of them in action, below: