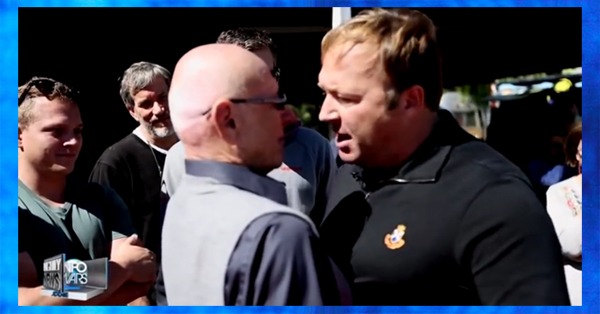 Conservative wingnut Alex Jones deliberately disrupting a Moms Demand Action event by corning members on camera. He got more than he bargained for from the parents of a 24-year-old girl who died in the Aurora massacre.

Alex Jones bullies Lonnie and Sandy Philips whose 24-year-old daughter Jessica was murdered in the 2012 gun massacre at a movie theater in Aurora, Colorado, in this clip we found earlier today from Mother Jones. [You might also want to check out Bostonian Owns Conspiracy Theory Reporter from Alex Jones’ InfoWars (VIDEO)]

As Mother Jones reports: “Last October, hundreds of armed people gathered for a rally at the Alamo in San Antonio, where Open Carry Texas had invited Alex Jones, the fringe radio host known for whipping up fans with squalls of anti-government paranoia.

At the podium, an assault rifle strapped across his back, Jones got into such a lather about Hitler and Mao and the Obama administration preparing to “enslave” Americans that he blew out his voice in less than five minutes. “These scumbags are all the same!” he shouted. He described a worldwide conspiracy to take away everyone’s guns, whose perpetrators included “the few dozen Democratic Party operatives they’re gonna have marching here in a little while, the so-called moms.”

Jones then hugged CJ Grisham [founder of Texas Open-Carry] before heading out to, as he would later put it on his show, “confront the victim disarmament crew.” He went to a local taco bar about a mile away, where Moms Demand Action was holding a midday kids’ event with crafts and family activities. Jones and his camera crew began cornering members of the group. The women told him they weren’t interested in talking on camera, but he kept at it.

As you can see in the video below, an elderly gentleman approached Jones to intervene telling him: “A gun grab is something that nobody in this country wants” at which point the two of them began bickering and Jones starting getting in the man’s face with his hands gesticulating and his chest puffed up.

At one point, the man’s wife tried to pull him away. “All right, go ahead,” Jones responded, adding “listen, I don’t want to beat an old guy up,” and poking his chest continues: “so don’t touch me.”

Eventually, Stephanie Lundy of Moms Demand Action approached Jones’ sidekick, Anthony Gucciardi, and informed him that the couple was Lonnie and Sandy Philips, whose 24-year-old daughter Jessica was murdered in the 2012 gun massacre at a movie theater in Aurora, Colorado.

However, Jones kept on accosting the couple saying: “Did you know assault rifles are used in 2 percent of crimes?”

Lonnie Phillips had enough and responded: “I know an assault rifle was used to murder my daughter in Aurora,” he snapped back, his voice rising.

You can watch the confrontation, below: