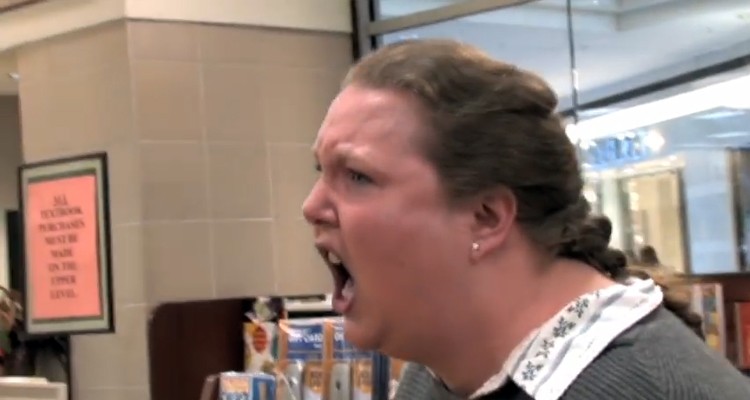 One of the greatest one-person flash mobs ever as this crazy chick flips out in a Barnes & Nobel bookstore as seen through this great video from 2011 that is making the rounds on social media again this week.

Here’s the story as discovered recently by The Book Patrol.

In January 28 – February 20 of 2011 Norfolk, Virginia’s The Generic Theater presented “a thrilling stage adaptation” of the Stephen King novel “Misery.”

As part of the promotional festivities one of their actresses went to the local Barnes and Noble for a little publicity stunt.

‘Crazy Chick Flips Out in Barnes & Noble’ is how they titled it and what we get is a “Misery” infused encounter with an unsuspecting (?) employee.

In the clip, the actress can be seen pretending to be the crazy woman in Stephen King’s book “Misery,” Annie Wilkes (Kathy Bates in the film version) asking for “Misery” by Paul Sheldon, who is the protagonist in Misery.

The giveaway is that at the end of the clip, the actress picks up a Stephen King book and wanders off – well that and the fact you can see the same actress in the second video, below, from The Generic Theater.

As The Book Patrol concludes: “Warning to booksellers: This video is completely cringeworthy.”