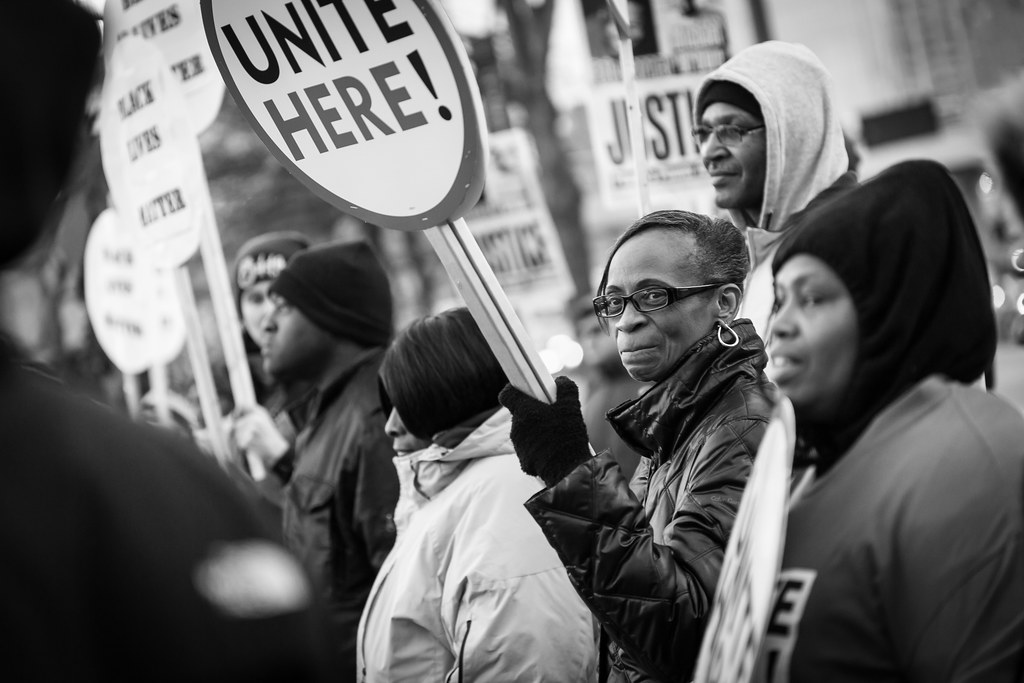 Progressive icon Sen. Elizabeth Warren (D-MA) gave a speech on racial inequality that is exactly what Black Lives Matter activists have been wanting to hear.

Warren delivered the remarks in Boston on Sunday at the Edward M. Kennedy Institute for the United States Senate, as part of the Institute’s “Getting to the Point” speaker series.

As The Washington Post reports, Warren “called for broad policing reform — including de-escalation training and body cameras for all police officers — and likened the current Black Lives Matter movement to the civil rights movement that won black Americans the right to vote in the 1960s.”

Warren began by speaking about the late Senator Ted Kennedy, whose seat she now holds, and about the debate of the Civil Rights Act, telling the audience:

She went on to detail conditions of 1960s regarding the racist oppression of African-Americans at that time:

A half-century ago, when Senator Kennedy spoke of the Civil Rights Act, entrenched, racist power did everything it could to sustain oppression of African-Americans, and violence was its first tool. Lynchings, terrorism, intimidation. The 16th Street Baptist Church. Medgar Evers. Emmett Till. When Alabama Governor George Wallace stood before the nation and declared during his 1963 inaugural address that he would defend “segregation now, segregation tomorrow, segregation forever,” he made clear that the state would stand with those who used violence.

Speaking to the present time, Warren told the audience that since that time “we have made real progress toward creating the conditions of freedom – but we have not made ENOUGH progress,” adding:

Fifty years later, violence against African Americans has not disappeared. Consider law enforcement. The vast majority of police officers sign up so they can protect their communities. They are part of an honorable profession that takes risks every day to keep us safe. We know that. But we also know – and say – the names of those whose lives have been treated with callous indifference. Sandra Bland. Freddie Gray. Michael Brown. We’ve seen sickening videos of unarmed, black Americans cut down by bullets, choked to death while gasping for air – their lives ended by those who are sworn to protect them. Peaceful, unarmed protestors have been beaten. Journalists have been jailed. And, in some cities, white vigilantes with weapons freely walk the streets. And it’s not just about law enforcement either. Just look to the terrorism this summer at Emanuel AME Church. We must be honest: Fifty years after John Kennedy and Martin Luther King, Jr. spoke out, violence against African Americans has not disappeared.

Warren went on to detail recent events harming the African-American community such as “five conservative justices on the Supreme Court gutted the Voting Rights Act two years ago, opening the floodgates ever wider for measures designed to suppress minority voting” adding that, “Today, the specific tools of oppression have changed-voter ID laws, racial gerrymandering, and mass disfranchisement through a criminal justice system that disproportionately incarcerates black citizens. The tools have changed, but black voters are still deliberately cut out of the political process.”

She also hit upon “economic injustice” telling the audience that “the legal changes in the civil rights era created new employment and housing opportunities. In the 1960s and the 1970s, African-American men and women began to close the wage gap with white workers, giving millions of black families hope.” However, “then, Republicans’ trickle-down economic theory arrived. Just as this country was taking the first steps toward economic justice, the Republicans pushed a theory that meant helping the richest people and the most powerful corporations get richer and more powerful.”

Today, 90% of Americans see no real wage growth. For African-Americans, who were so far behind earlier in the 20th Century, this means that since the 1980s they have been hit particularly hard. In January of this year, African-American unemployment was 10.3% – more than twice the rate of white unemployment. And, after beginning to make progress during the civil rights era to close the wealth gap between black and white families, in the 1980s the wealth gap exploded, so that from 1984 to 2009, the wealth gap between black and white families tripled.

Speaking about the importance of “safeguarding our communities from violence,” Warren told the audience:

But none of us can ignore what is happening in this country. Not when our black friends, family, neighbors literally fear dying in the streets.

Once again, the task begins with safeguarding our communities from violence. We have made progress, but it is a tragedy when any American cannot trust those who have sworn to protect and serve. This pervasive and persistent distrust isn’t based on myths. It is grounded in the reality of unjustified violence.

Policing must become a truly community endeavor – not in just a few cities, but everywhere. Police forces should look like, and come from, the neighborhoods they serve. They should reach out to support and defend the community – working with people in neighborhoods before problems arise. All police forces – not just some – must be trained to de-escalate and to avoid the likelihood of violence. Body cameras can help us know what happens when someone is hurt.

Warren concluded her speech comparing the civil rights movement of the past to the current anti-police-brutality movement:

The first civil rights battles were hard fought. But they established that Black Lives Matter. That Black Citizens Matter. That Black Families Matter. Half a century later, we have made real progress, but we have not made ENOUGH progress. As Senator Kennedy said in his first floor speech, “This is not a political issue. It is a moral issue, to be resolved through political means.” So it comes to us to continue the fight, to make, as John Lewis said, the “necessary trouble” until we can truly say that in America, every citizen enjoys the conditions of freedom.

You can read the full transcript here.