Ted Cruz Thy Name Is Hypocrite hypocrite noun hyp·o·crite \ˈhi-pə-ˌkrit\: a person who claims or pretends to have certain beliefs about what is right but who behaves in a way that disagrees with those beliefs

Republican presidential hopeful and Tea Party favorite Ted Cruz has decided to celebrate Constitution Day with a huge dose of hypocrisy on his Facebook page.

As part of his deception, Cruz created a meme to celebrate the occasion – writing: “As President, I’ll defend the Constitution — every single word! #HappyConstitutionDay”

Of course, for anyone who knows his record – that is complete rubbish.

Let’s take a look at his recent record in regards to his evil Constitution, shall we?!?!

Back in July of this year, the Tea Party nitwit convened a senate meeting to discuss altering the Constitution in the wake of a Supreme Court ruling his disagreed with – you know, the one upholding Obamacare.

To hear Republican presidential hopeful Ted Cruz (TX) tell it, there is nothing he loves more than the United States’ Constitution and the “the rule of law”  – the principle that “no branch of government is above the law, and no public official may act arbitrarily or unilaterally outside the law.” However, back in June Cruz decided to scrap the Constitution and the rule of law when he posted a call for the death of any member of ISIS one of his official Facebook pages writing: “My approach to radical Islamic terrorism: If you go and join ISIS, you’re signing your death certificate.”

In the beginning of June of this year, Cruz tumbled – once again – into the depths of hypocrisy when Second Amendment loving Ted Cruz announced that as part of a fundraising effort and associated sweepstakes, one lucky supporter will join him on a “shooting excursion,” according to Talking Points Memo. There’s a caveat though.

Sen. Ted Cruz (R-TX) plans to take one lucky supporter with him on an upcoming “shooting excursion” as part of a recently launched fundraiser and sweepstakes for his presidential campaign. But there’s a catch: the winner may have to endure a background check first.

See the Constitution is sacred and Cruz intends to defend its “every word,” that is unless you want to go hunting with them. Then the tyranny of background checks doesn’t apply – probably because he doesn’t want some nut job with a loaded gun anywhere near him.

Then there’s Cruz’s meltdown of last November when he lied to the American people and vowed to seize control of the government in order to stop President Obama’s immigration actions.

In short, junior Texas Senator Ted Cruz took to the airwaves and the internet to defy President Obama’s recently announced executive actions to fix an immigration system that has been broken for decades.

His justification was two-fold:

And his plan patently un-Constitutional plan included taking control of the government by force using the following two strategies:

We rate Ted Cruz’ claim that he plans to “defend the Constitution — every single word!” to be way too many Pinocchios to possibly fit on this page. 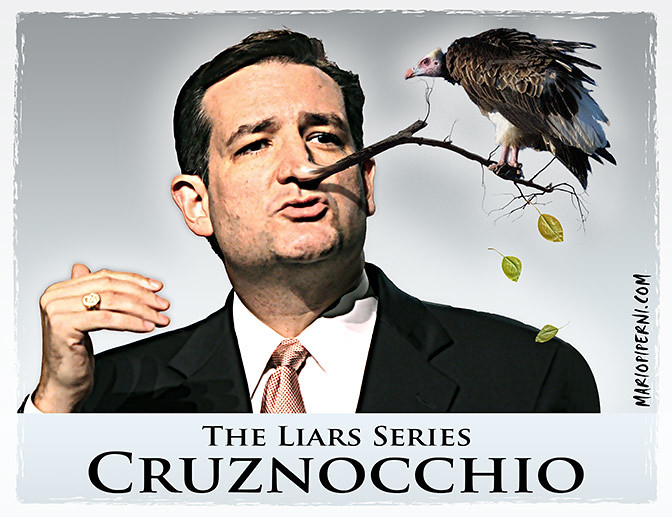 Featured Image, Ted Cruz-nocchio, is copyright (c) 2013 by Mario Piperni and made available under an Attribution-NoDerivs 2.0 Generic (CC BY-ND 2.0) license.