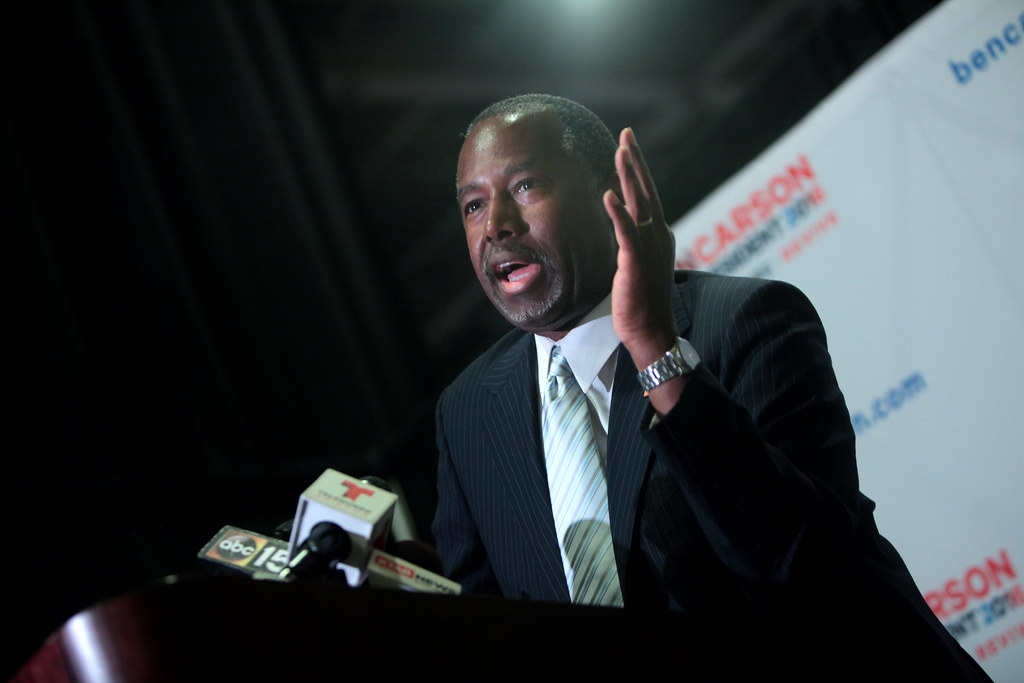 Ben Carson’s lies and lack of critical thinking skills go beyond evolution, the Big Bang Theory, geology, and physics. In this instance, they are potentially deadly.

Donald Trump’s proposed Housing Secretary has a shady past to say the very least, raising serious questions about his qualification to serve in a cabinet level position.

Dr. Ben Carson was caught lying about his business connections to Mannatech, a nutritional supplement company, during the third Republican debate.1 However, there is a much greater issued involved that has received little media coverage.

As Salon reported at the time, “conservative figureheads” such as Carson use their status to scam others.”

“The claims made by the con artists, who see the conservative movement as a source of elderly and naive marks to target, are far from harmless,” the report noted, adding “It’s not just that they drain money out of people, but that they often claim that nutritional supplements can cure cancer and Alzheimer’s. That Carson would lend his good name as a neurosurgeon to such claims is so awful that the word ‘unethical’ doesn’t begin to encompass it.”

National Review reported on an insidious act by Mannatech that should have served as a warning to Carson about the company’s integrity – or lack thereof:

In November 2004, the mother of a child with Tay-Sachs disease who died after being treated with Mannatech products filed suit against the company in Los Angeles Superior Court, seeking damages for intentional infliction of emotional distress, negligent misrepresentation, and conspiracy to commit fraud. The suit alleged that the Mannatech sales associate who “treated” the three-year-old had shared naked photos of the boy — provided by his mother as evidence of weight gain, with an understanding that they’d be kept confidential — with hundreds of people at a Mannatech demonstration seminar. The sales associate was further accused of authoring an article, in the Journal of the American Nutraceutical Association in August 1997, explicitly claiming that Mannatech’s supplements had improved the boy’s condition, even though the boy had, by that time, died. The suit also presented evidence that Mannatech was still using photographs of the boy in promotional materials on its website in March 2004, “with the clear inference that [the boy] was alive and doing well some seven years after his actual death.”

In 2007, three years after Carson’s first dealings with Mannatech, Texas attorney general Greg Abbott sued the company and Caster [Samuel L. Caster, the company’s founder], charging them with orchestrating an unlawful marketing scheme that exaggerated their products’ health benefits. The original petition in that case paints an ugly picture of Mannatech’s marketing practices. It charges that the company offered testimonials from individuals claiming that they’d used Mannatech products to overcome serious diseases and ailments, including autism, non-Hodgkins lymphoma, and life-threatening heart conditions.

Despite all this controversy surrounding Mannatech, Carson began a ten-year relationship with Mannatech to the tune of paid speeches, product endorsement,  and starring in a series of promotional videos for the company, according to a report by the Wall Street Journal published earlier this month. He even credited the company’s products for his prostate cancer symptoms disappearing in a 2004 infomercial.

As Carson put it, he began taking the Mannatech supplements, and “within about three weeks my symptoms went away, and I was really quite amazed.” Carson added that “I actually toyed with the idea of not having surgery done, because it was recommended that I undergo surgery.”

Carson did go on to have the life-saving surgery, but as The Daily Beast reports, Carson continued to promote the idea that it was the Mannatech products that cured him – that he only did the surgical procedure out of concern that others might not be as “religious about taking the supplements” as him:

Dallas Weekly reported in a 2004 interview that Carson “said his decision to have a medical procedure resulted from his concern for those people who might neglect traditional medical procedures because they had learned of his personal experience with supplements.”

The neurosurgeon told Dallas Weekly that he had his prostate removed to be a role model.

“I knew that other people with my condition might not have been as religious about taking the supplements as I had been,” Carson said.

However, as The Daily Beast reports, there are serious questions regarding Carson’s story. For instance, for the first two years after his August 2002 surgery, Carson never mention his use of Mannatech supplements.2 Carson did not start speaking of his success with Mannatech supplements until 2004, at which time he began receiving compensation for giving speeches for the company.3

Carson’s interactions with the company continued until at least March 2014… a decade after the company’s marketing practices had first begun to come into question. That month, about a week before the online video was posted, Carson shot a PBS special in which he discusses nutrition, again praising “glyconutrients” in generic language similar to the video’s: We aren’t necessarily getting the nutritional value that we need. So as I analyzed all those things, I began to realize that that was a significant portion of my problem. And I started to try to figure out, how do you get that supplementation? Well, I became particularly interested in glycoscience, glyconutrients. These things are in your apples, your bananas and beets and everything, you know, that’s growing, but by the time we get them, they frequently are gone. And I discovered you can actually concentrate those in powders and pills and things like that. And there are a number of different types of vitamins and supplements that are there. I advise people to actually look into this.

Asked by National Review for a statement, Mannatech initially declared, “Dr. Carson is not a spokesperson or endorser of Mannatech.” However, as National Review reported: “the company’s website touts Carson in connection with its products, and its homepage features a short video of Carson, promoting the special: ‘On March 11, Dr. Ben Carson, world-renowned pediatric neurosurgeon, as well as humanitarian and best-selling author, conducted an informational presentation on PBS regarding brain health and referencing glyconutrients.'”

After inquiries from National Review Online, a statement from the company later clarified that “a group of Mannatech independent distributors, not Mannatech Incorporated, sponsored Dr. Carson to be the sole speaker on a PBS special.” The special has aired several times, including January 4 of this year, on Maryland Public Television.

As CNN reported earlier this week, “Despite Carson’s denial in the debate, he admitted that he did paid speeches for Mannatech, and credited the company’s products for his cancer symptoms disappearing and his image appeared on the firm’s website as recently as 2014 — so it appears he was very much involved with the company even after its 2009 settlement over false advertising.”4

An article published by Science Blogs, perfectly summarized the controversy. And although it does not specifically cite the 2016 presidential campaign, Science Blogs provides ample reasons why Dr. Ben Carson should be disqualified from seeking the presidency:

As disturbing as Dr. Carson’s advocacy of pseudoscience like creationism is, I find this revelation about his longstanding relationship with Mannatech to be far more disturbing, striking as it does at the heart of his strength, his reputation as a physician and neurosurgeon. It turns out that Carson’s lack of critical thinking skills goes beyond just evolution, the Big Bang Theory, geology, and physics. As great a neurosurgeon as he was, he was so easily persuaded by pseudoscience that he was willing to promote nonsense like Mannatech as a treatment for prostate cancer.

FOOTNOTE 1: At issue during the debate was a company called Mannatech, a maker of nutritional supplements, with which Carson had a 10-year relationship. CNBC debate moderator Carl Quintanilla asked Carson why he continued his “involvement” with a company that “offered claims that they could cure autism, cancer,” and ended up paying  “$7 million to settle a deceptive marketing lawsuit in Texas.”

Carson denied the allegation, responding: “Well, that’s easy to answer. I didn’t have an involvement with them. That is total propaganda, and this is what happens in our society. Total propaganda.” Carson went on to explain that he “did a couple of speeches for them,” adding that they were “paid speeches.”

FOOTNOTE 2: The Daily Beast reports that Carson failed to mention supplements during a November 2002 interview with The 700 Club. In the course of the interview, “Carson discussed how eating better can help take care of one’s body and that preventative medicines could also help the immune system. This would appear to be the perfect opportunity to mention the glyconutrients he would later say helped him, but he did not. Mysteriously there is no mention of them whatsoever from Carson.”

“Organic fruits and vegetables. Much less in the way of processed foods,” Carson said. “Snack foods are pretty much out. I don’t drink soda anymore.”

The Daily Beast continued their report, stating: “In another story about his recovery in Ebony magazine in January 2003, Carson also did not mention glyconutrients,” and “Carson also gave an address at the Niagara University commencement in May 2003 where he discussed his cancer as well. Yet there are no mentions of Mannatech or any of its products.”

FOOTNOTE 3: The Atlantic reports that: “As the Wall Street Journal reported earlier this month, Carson’s relationship with the company deepened over time, including “four paid speeches at Mannatech gatherings, most recently one in 2013 for which he was paid $42,000, according to the company.” The company disputes that Carson was a “paid endorser or spokesperson,” according to the Journal, and claims his financial compensation went to charity.”

CNBC moderator Quintanilla also pointed out Carson’s image was on the Mannatech website’s homepage, with the firm’s logo prominently displayed over his shoulder. Carson said, “If somebody put me on the homepage, they did it without my permission.” When Quintanilla then asked, “Does that not speak to your vetting process or judgment in any way?” Carson started to respond, “No, it speaks to the fact that I don’t know those –” and was interrupted by audience boos apparently directed at the moderator. Carson concluded, “See, they know.”