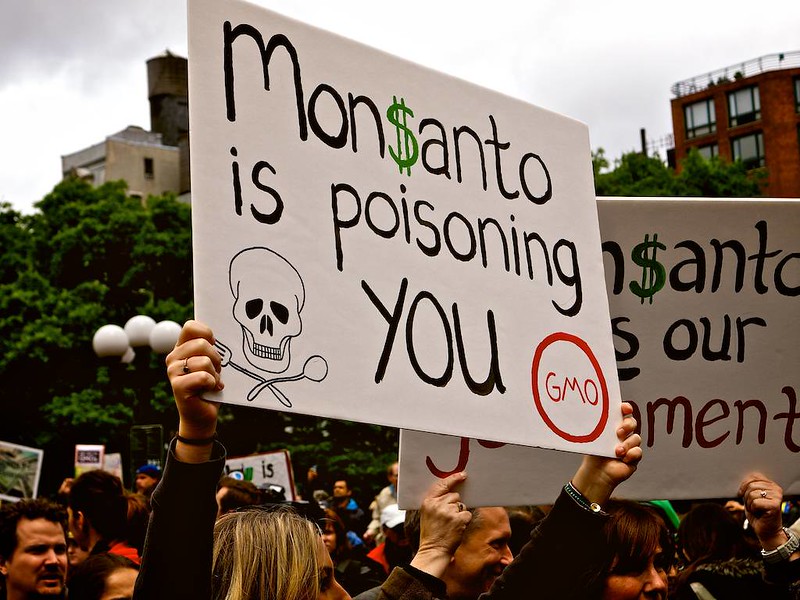 Mercenaries, former CIA and black ops agents battling it out with a ragtag group of civilian activists on the behalf of an evil multinational corporation hellbent on mutating private citizens in the name of corporate profits….

If we could only be so lucky. As it turns out, this is but another chapter in the ongoing controversy surrounding Monsanto [1] and its multi-billion dollar empire. It seems that Monsanto has enlisted the services of organizations such as Blackwater to provide “Monsanto ’s security group with reports about activities or groups that could pose a risk to the company, its personnel or its global operations,” as reported by Monsanto themselves back in 2010.

Getting back to mercenaries, black ops, and the CIA – The Nation published an article back in their October 4, 2010 edition, which reported that internal Blackwater documents revealed their clandestine work for multinationals and governments to include Monsanto:

“[E]ntities closely linked to the private security firm Blackwater have provided intelligence, training and security services to US and foreign governments as well as several multinational corporations, including Monsanto, Chevron, the Walt Disney Company, Royal Caribbean Cruise Lines and banking giants Deutsche Bank and Barclays, according to documents obtained by The Nation.” [emphasis added]

By January 2008, a relationship was solidified by Cofer Black, the chair of Blackwater subsidiary Total Intelligence [2] [3] [4], and Kevin Wilson, Monsanto Security Manager for Global Issues, at a meeting in Zurich, with Monsanto willing to pay a sizable sum (up to $500, 000) for Blackwater agents to infiltrate anti-Monsanto organizations. According to The Nation, after that meeting, Black sent an e-mail to Blackwater executives to include Blackwater’s owner and founder, Erik Prince and Enrique Prado [5] at their Blackwater e-mail addresses.

Black wrote that Wilson “understands that we can span collection from internet, to reach out, to boots on the ground on legit basis protecting the Monsanto [brand] name…. Ahead of the curve info and insight/heads up is what he is looking for.” Black added that Total Intelligence “would develop into acting as intel arm of Monsanto.” Black also noted that Monsanto was concerned about animal rights activists and that they discussed how Blackwater “could have our person(s) actually join [activist] group(s) legally.”

To fully grasp the potential magnitude of this operation, one need look no further than Black, as reported by The Washington Post:

“Total Intelligence Solutions, has assembled a roster of former spooks — high-ranking figures from agencies such as the CIA and defense intelligence — that mirrors the slate of former military officials who run Blackwater. Its chairman is Cofer Black, the former head of counterterrorism at CIA known for his leading role in many of the agency’s more controversial programs, including the rendition and interrogation of Al-Qaeda suspects and the detention of some of them in secret prisons overseas.”

RJ Hillhouse, who writes a well-respected national security blog called The Spy Who Billed Me, wrote the following frightening analysis of Total Intelligence back in 2007, shortly after its creation:

“So what can really be done with a mini-CIA and an offshore SEAL unit? I’ve been asking myself that question since the late January announcement of the creation of the private intel firm, Total Intel, particularly because it is marketing itself to Fortune 500 companies. The questions becomes more interesting in light of the private spy shop’s two strategic affiliates, Blackwater USA and Blackwater’s Barbados-registered affiliate, Greystone, Ltd. Total Intel represents some of the best and brightest the CIA has produced and Blackwater commands a formidable group of tier-one Special Forces operators. Simply put, together these companies rival and possibly surpass the capabilities of intelligence services of most nations–and I’m not talking Third World. Such capacity for covert operations has never before been in private hands–and for rent.”

Hillhouse went on to add:

“In the old days, a corporation had to spend millions lobbying select Senators and Congressman and the White House to move the US intelligence apparatus to support such activities in line with its corporate interests. Now they can cut out the middle man.”

In an effort to squash this story, Monsanto issued a public statement trying to distance themselves from Blackwater:

Monsanto did not hire Blackwater nor did we approve of the firm infiltrating any groups as was suggested in the Nation article. In 2008, 2009 and early 2010, a firm called Total Intelligence Solutions (TIS) provided Monsanto ’s security group with reports about activities or groups that could pose a risk to the company, its personnel or its global operations. […] Prior to retaining TIS, Monsanto specifically [i]nquired about and was informed that TIS was a completely separate entity from Blackwater.” [emphasis added]

While technically true, their effort proved at best a poorly constructed sleight of hand as The Nation had already reported that both Blackwater and Total Intelligence are owned by the same entity. Additionally, back on November 2, 2007, The Washington Post reported:

“The Prince Group, the holding company that owns Blackwater Worldwide, has been building an operation that will sniff out intelligence about natural disasters, business-friendly governments, overseas regulations and global political developments for clients in industry and government.

Once one can see the connection between Monsanto and Total Intelligence Solutions, one has to wonder what role – if any – the Bush administration played along the way and what – if any – connection might still exist between Monsanto and Bush and Cheney. Salon released a scathing article back in 2007 reporting on Blackwater’s “long ties to the White House and prominent Republicans, including Ken Starr.”

As Salon reported, at the time Rep. Henry Waxman, D-Calif., chairman of the House Oversight and Government Reform Committee, was holding a hearing on the U.S. military’s use of private contractors but “the State Department directed Blackwater not to give any information or testimony without its signoff.” Later, “after a public spat between Rep. Waxman and Secretary of State Condoleezza Rice, the State Department relented,” and eventually Blackwater CEO and founder Erik Prince testified before the committee.

Salon went on to report that “The ties between State and Blackwater are only part of a web of relationships that Blackwater has maintained with the Bush administration and with prominent Republicans.” According to Salon,

Prince, who founded Blackwater in 1996 but reportedly took a behind-the-scenes role in the company until after 9/11, has connections to the Republican Party in his blood. His late father, auto-parts magnate Edgar Prince, was instrumental in the creation of the Family Research Council, one of the right-wing Christian groups most influential with the George W. Bush administration.

Prince has also “been affiliated with the Council for National Policy, the secretive Christian conservative organization, whose meetings have been attended by Dick Cheney, Donald Rumsfeld and Paul Bremer, and whose membership is rumored to include Jerry Falwell, Ralph Reed and Dobson.”

married into the DeVos family, one of the country’s biggest donors to Republican and conservative causes. (“I know a little something about soft money, as my family is the largest single contributor of soft money to the national Republican Party,” Betsy DeVos wrote in a 1997 Op-Ed in the Capitol Hill newspaper Roll Call.) She chaired the Michigan Republican Party from 1996 to 2000 and again from 2003 to 2005, and her husband, Dick, ran as the Republican candidate for Michigan governor in 2006.

In an article from 2009, The Nation reported on the Bush administration’s use of Blackwater as CIA assassins in Afghanistan. Jack Rice, a former CIA field operator who worked for the directorate of operations, which runs covert paramilitary activities for the CIA told The Nation that

What the agency was doing with Blackwater scares the hell out of me. When the agency actually cedes all oversight and power to a private organization, an organization like Blackwater, most importantly they lose control and don’t understand what’s going on.

What makes it even worse is that you then can turn around and have deniability. They can say, ‘It wasn’t us, we weren’t the ones making the decisions.’ That’s the best of both worlds. It’s analogous to what we hear about torture that was being done in the name of Americans, when we simply handed somebody over to the Syrians or the Egyptians or others and then we turn around and say, ‘We’re not torturing people.’

The Nation went on to report that “Illinois Democrat Jan Schakowsky, a member of the House Intelligence Committee, said that because of her oath of secrecy on sensitive intelligence issues, she could neither confirm nor deny that Congress was aware of Blackwater’s involvement in this program” and she “also declined to comment on whether Blackwater came up at a June briefing by CIA director Leon Panetta” — a meeting that eventually “sparked calls for an investigation into whether Vice President Dick Cheney ordered the CIA to conceal an assassination program from Congress.”

Schakowsky did tell The Nation that

What we know now, if this is true, is that Blackwater was part of the highest level, the innermost circle strategizing and exercising strategy within the Bush administration. Erik Prince operated at the highest and most secret level of the government. Clearly Prince was more trusted than the US Congress because Vice President Cheney made the decision not to brief Congress. This shows that there was absolutely no space whatsoever between the Bush administration and Blackwater.

At this point, it is unclear exactly who is providing these so-called “security services” to Monsanto, but with billions upon billions of dollars at stake, there is little doubt that some organization continues to provide these services.

[1] Monsanto is the world’s leading producer of genetically engineered seeds and was among the first in the world to genetically modify a plant cell and to conduct field trials of genetically modified crops. Monsanto was also the company behind the manufacture of infamous products such as Agent Orange, DDT, PCBs, and recombinant bovine somatotropin.

[3] The Washington Post reported the connection between TIS and Blackwater back in 2007 as well. [Dana Hedgpeth, “Blackwater’s Owner Has Spies for Hire“, Washington Post, Nov. 3, 2007, p.A01.]

[5] Enrique Prado is a former CIA paramilitary officer and the coordinator of Blackwater’s covert CIA business who set up a “global network of foreign operatives, offering their “deniability” as a “big plus” for potential Blackwater customers” as reported by The Nation.