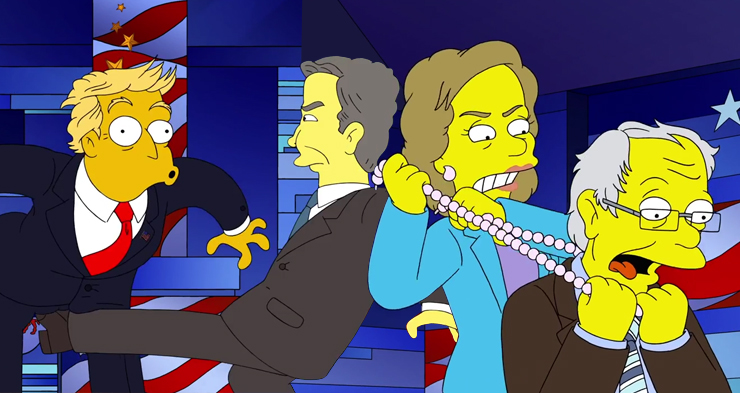 The Simpsons take on the insanity of the 2016 presidential race.

A new online video of The Simpsons takes on the divisive nature of the 2016 presidential campaign, briefly imagining a world where the candidates all get along with each other.

The two-minute clip begins with Marge Simpson awakening from a bad dream where the candidates are mocking each other using actual quotes from the debates.

“I can’t take it anymore,” she tells Homer Simpson as she begins hyperventilating. “Basic manners are gone from politics,” she adds. “What is it with these ding-dongs?”

As Lisa, Bart, and Maggie enter the bedroom Homer attempts to calm Marge down as she breathes into a paper bag, telling her that the presidential race is “just like when you have a bad dream, except this is real and will probably ruin your lives.”

As they return to bed he tells Marge to “visualize another America,” one in which “Republicans and Democrats and Donald Trump all get along.”

As they fall asleep the clip switches to a dream sequence in which the full crowd of remaining Democratic and Republican hopefuls begin dancing and singing along to James Taylor’s classic song “How Sweet It Is.”

However, things quickly fall apart as the candidates slip back into their contrary ways.

“I was perfect, the rest of you morons were flat,” Trump exclaims before attacking Ted Cruz about his Canadian birth.

Jeb Bush asks Trump, “Want to see something my mother suggested?,” and goes on to kick him in the groin.

Bernie Sanders asks Hillary Clinton: “Hillary, if I get elected, will you tell me what to do?,” as she begins choking him with her pearl necklace.

It seems that even in the dream world of Marge Simpson, the ridiculous comic nature of the campaign is unstoppable.