March 2, 2016 by Kimberley Johnson No Comments 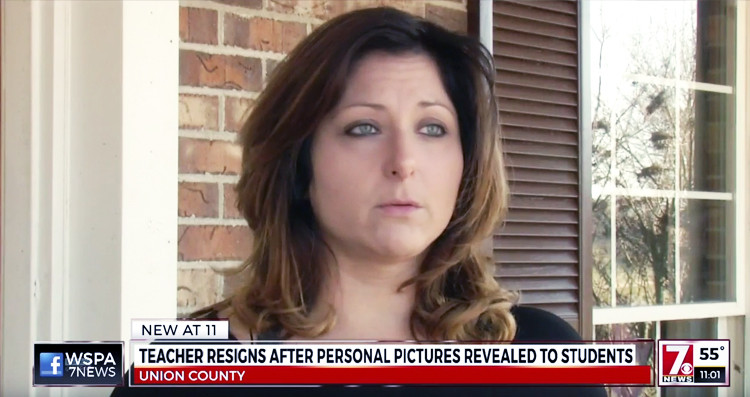 13-year veteran mechatronics teacher Leigh Anne Arthur was forced to resign in February after the Union County South Carolina School District threatened to fire her because a student stole nude pictures from her personal cell phone and posted them to social media.

While Arthur was walking the halls in between classes, a student stole her cell phone – which was not locked – and found partially nude photos Arthur took for her husband. The student sent the pictures to members of the school community as well as posting them on social media.

When Arthur returned to her classroom, she said the unnamed student told her “…your day of reckoning is coming.”

There’s no indication the student will face disciplinary action for stealing and circulating his teacher’s private pictures. Arthur said that according to school district policy, the student should have been expelled, but to her knowledge, that has not yet happened.

In addition to demanding Arthur’s resignation, the school district is also suggesting she may have committed a crime and could face charges. Superintendent David Eubanks told WSPA that Arthur may have contributed to the delinquency of a minor — a crime punishable by up to three years in prison or a fine as large as $3,000.

Arthur insists she’s not at fault and did not knowingly leave her cell phone on her desk and argued that her privacy was invaded, yet she’s the one who was punished.

“The whole premise of my privacy being invaded is being ignored and that’s what’s wrong.

He opened up my gallery for my pictures and he found inappropriate pictures of myself and he took pictures from his cell phone of that and then he told the whole class that he would send them to whoever wanted them.”

A petition was created to reinstate her teaching position and has been signed by both students and parents. Arthur reports the support for her has been overwhelming. She plans on pressing charges against the student next week.

WYFF News 4 reports that Superintendent Eubanks notified law enforcement officials and the Union County Sheriff’s Office is now investigating incident and will determine what, if any, charges are approiate.