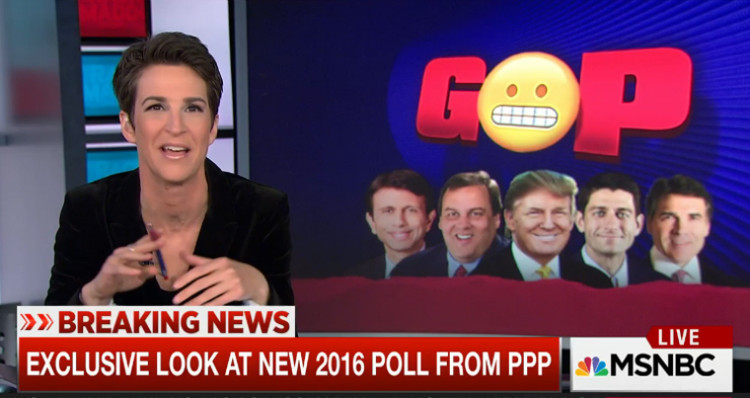 Monday night MSNBC‘s Rachel Maddow presented the results of a new Public Policy Polling (PPP) poll that found, among other things, that presumptive Republican nominee Donald Trump is less popular than lice; “and yet, contrary to media narratives about a party split, Republican voters are shown as likely to vote for him and even Republican politicians who said terrible things about him are eating their words and supporting him.”

Maddow began by assuring viewers that the poll is real. “I am not making this up to entertain you,” she said, adding “Even though I am sometimes tempted to do things like that, this is real.”

Speaking of the poll, Maddow explained: “Not to nitpick, but this new national polling also finds that Mr. Trump is viewed less favorably than not just lice, but also traffic jams; used car salesmen; hipsters; the DMV; jury duty; the band Nickelback; and also root canals.

Maddow also reported that Trump’s popularity compared to cockroaches and hemorrhoids was split between men and women.

“Women voters actually prefer both cockroaches and hemorrhoids to Donald Trump,” she explained, noting that it was “weird” that it “turns out there’s a gender split on those particular issues.”

The poll was not released until this morning and confirms Maddow’s report.

The PPP site reports, along with the poll results, that:

Much has been made of Trump’s unpopularity over the course of this campaign and certainly we find that to be the case too- only 34% of voters have a favorable opinion of him to 61% who have an unfavorable one. But we decided to take it a step further in finding out just how much people dislike Trump, by matching him in a series of heads to heads with things such as root canals, cockroaches, and even hipsters to see who voters had a higher opinion of.

You can see the full results here, and you can watch Rachel Maddow discussing the poll’s results in the video, below: