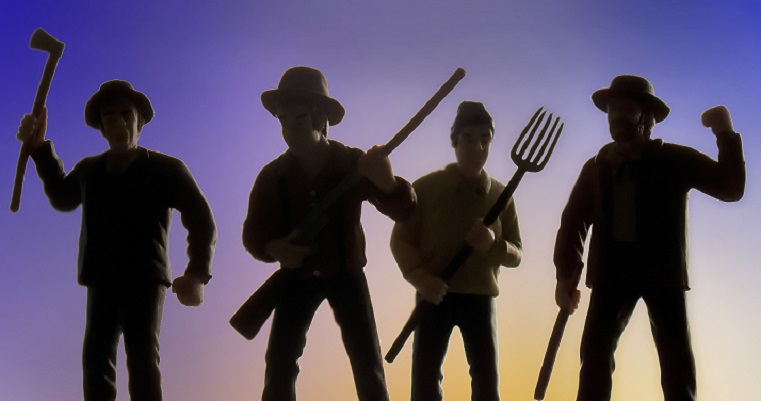 The Trump trolls are out in full force.

I posted a meme on both of my Facebook pages; on my profile page and also on my like page. Click this link to view it.

“When people say ‘let’s make America great again’ what period of American history they talking about? When we were a British colony with unfair taxes? When we burnt women at the stake because we thought they were witches? When we practiced slavery? When women and minorities couldn’t vote? When we ignored the Holocaust? When we dropped two atomic bombs on Japan? When we sent thousands of our men to Vietnam to fight and die under false pretenses?  Or when we did the same in Iraq 12 years ago and are still doing today? What kind of America do you forsee (sic) us returning to when you say that exactly?”

Wow, talk about a shitstorm of Trump trolls! So many angry Trump trolls messaged me, posted on my page and commented. One guy posted this on my wall, “I don’t have time to respond to your idiotic post right now but I will soon.” After several hours he sent me a private message and it said, “You suck.” He then visited my like page and posted a picture of a baby monkey and said it was President Obama’s baby picture – which I immediately deleted.

Some of the Trump trolls have commented they’re veterans and have somehow assumed this message is meant as a dig against them personally. One man argued that liberals are against the military – which is not true – and he implied that those same liberals aren’t grateful for the freedoms that resulted from wars – again, not true. I’m not really sure why he and others like him jumped to this inaccurate conclusion – the meme didn’t denigrate veterans. The wars in Vietnam and Iraq were both senseless. Veterans lost lives and limbs – for what? Who benefited? What freedoms were gained?

No one is denying that most of the freedoms we enjoy today are the direct result of fighting the British in the American Revolution, and, while it was awful, it was necessary. The Civil War was necessary because African-Americans were literally bought, sold and owned by white people. Black people were beaten, raped and forced to work for free. I can’t speak for everyone, but I know I’m not alone when I say I’m eternally grateful slavery was abolished, and that we defeated the British. I’m grateful for the soldiers who risked and lost their lives in World Wars I and II. However I’m sure I’m not the only person to recognize the war in Iraq was started on false pretenses. There were no weapons of mass destruction. That war was all about oil, money and power. No freedoms were gained. Lives were lost. Period.

Trump trolls don’t like this message because it goes against their core racist, sexist and bigoted beliefs – fueled by Fox “News” and conservative (hate) radio. The idea that America has thrived under an African-American president (despite historic Republican obstruction), and that Obama will go down as one of the greatest presidents in American history is terribly upsetting to the Trump-ets.

Part of America’s past is ugly. Part of America’s present is ugly. Donald Trump is the embodiment of everything that is wrong with the conservative movement today. He’s a liar, and he’s playing all of his supporters for fools. He doesn’t care about anyone but himself. He’s a megalomaniacal narcissist, and he laughs at his army of blind followers. Given the chance, he would sell each and every one of them down the river if it would benefit him. But he has the BEST WORDS, ya’ll.

The whole point of the meme is that we need to go forward, not backward. It’s not rocket science and it’s not anti-veteran or anti-American. It does highlight the fact that Donald Trump and the Republican Party want to take America back to a time when only rich white people had all the power, and women and minorities were treated like property – or worse.

But please, message me and tell me how I’m unpatriotic because I believe in equality for all people no matter their race or gender. I’ll be here waiting to block you.