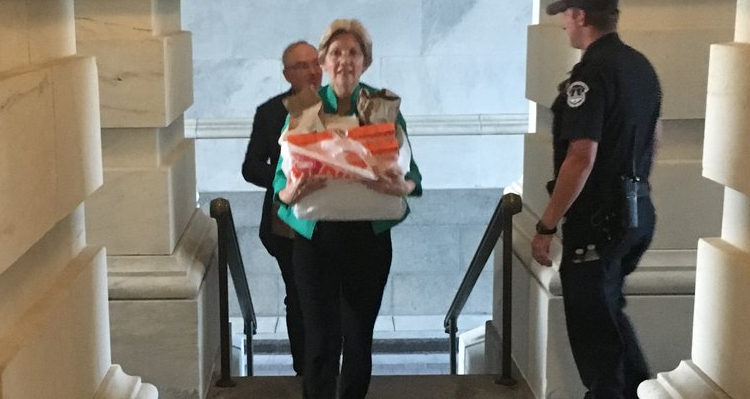 Elizabeth Warren receives massive applause after treating House Democrats to donuts as a show of solidarity with their sit-in.

Firebrand progressive Elizabeth Warren is showing solidarity with House Democrats who staged a sit-in in an effort to force a vote on gun legislation.

As Boston.com reports, “House Democrats may have been in a need of a boost Wednesday evening, having occupied the House chamber since around 11:30 a.m.” and “like a true Massachusetts senator, Elizabeth Warren arrived to provide sustenance for the protest—in the form of Dunkin’ Donuts.”

Warren tweeted about the whole affair, writing that she supports the #NoBillNoBreak movement – referring to the Democratic demand that congress take a vote on gun measure prior to going on break beginning this Friday.

As Boston.com continues, Warren “who had also visited the House sit-in earlier in the day, proclaimed ‘I just brought Dunkin’ Donuts!'” upon arrival at the House chamber, and “multiple” Twitter accounts report that she received “loud applause from her fellow Democrats.”

Participants of the sit-in say they are prepared to continue their protest for as long as it takes – so any form of “caffeine and carbs might well be useful,” according to the Boston.com report.

Rep. Joe Kennedy – also of Massachussets – posted his special thanks to Warren for the gesture and tweeted a list of snacks other Democratic Senators had provided to support the sit-in.

You can see a couple of his tweets, below.

MA's senior senator knows how to fuel up for a fight. @SenWarren brings Dunks to the House floor, chamber erupts in applause.

Just received some delicious snacks for our #NoBillNoBreak sit-in. Thanks to our Senate colleagues! pic.twitter.com/5HO1rwOWtP