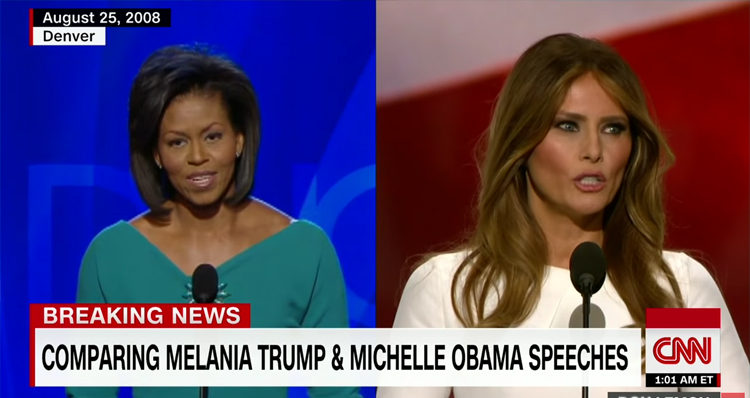 The Guardian reports that “Journalist Jarrett Hill was among the first to point out that lines Donald Trump’s wife spoke about the necessity of hard work and strong family values seemed familiar.”

Melania Trump took passages out of Michelle Obama’s speech nearly verbatim, as you can see from the partial transcripts, below:

And Barack and I were raised with so many of the same values: that you work hard for what you want in life; that your word is your bond and you do what you say you’re going to do; that you treat people with dignity and respect, even if you don’t know them, and even if you don’t agree with them.

And Barack and I set out to build lives guided by these values, and pass them on to the next generation. Because we want our children — and all children in this nation — to know that the only limit to the height of your achievements is the reach of your dreams and your willingness to work for them.

My parents impressed on me the values: that you work hard for what you want in life. That your word is your bond and you do what you say and keep your promise. That you treat people with respect. They taught me to show the values and morals in my daily life. That is the lesson that I continue to pass along to our son.

And we need to pass those lessons on to the many generations to follow. Because we want our children in this nation to know that the only limit to your achievements is the strength of your dreams and your willingness to work for them.

As Vox reports, “These aren’t just throwaway lines you’d expect in any speech given by a political spouse. They’re lines of actual substance and style, which is why so many people are calling this plagiarism — it’s too close to be a coincidence.”

Robert Costa of The Washington Post tweeted the initial response from the Trump campaign, which appears to set up an alibi for Melania by stressing that “Melania’s team of writers” had composed “her beautiful speech.”

However, that excuse fails in light of an earlier admission by Melania to Matt Lauer that she “wrote [the speech] with as little help as possible.”

Vox goes on to report an ironic twist to this story, via former Obama speech writer Jon Favreau:

Should also say that, like her husband, Michelle wrote a lot of that 2008 campaign speech herself.

You can watch a damning side-by-side comparison of the two speeches, below: