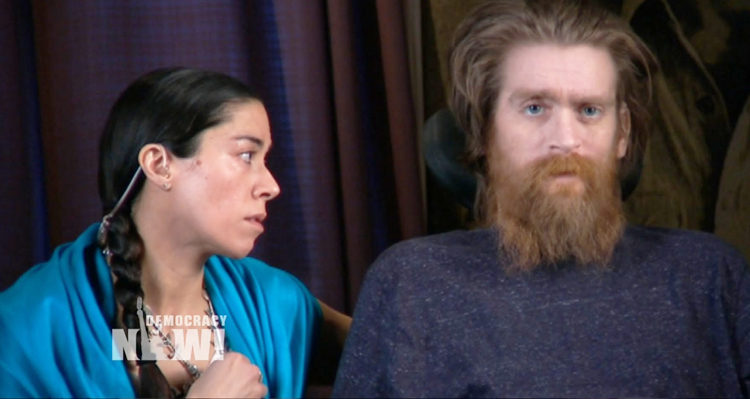 Tomas Young reminded the world in 2013 that Bush and Cheney were responsible for the Iraq War, long before any official confirmation.

In March of 2013 paralyzed Iraq veteran Tomas Young reminded the world in a powerful letter about who was to blame for Iraq – former Pres. George W. Bush and his vice president, Dick Cheney – calling them war criminals and murderers of both Iraqis and Americans.

In a powerful clip from Democracy Now, marking the tenth anniversary of the Iraq War, Tomas told part of his story and read from a letter to Bush and Cheney.

It’s haunting to know that we are hearing these words from a man who was on hospice care and who said at the time of this reading that he had chosen to end his life amid unbearable physical and emotional pain. [He later changed his mind]

As Young put it in an interview with TruthDig at the time:

“I felt at the end of my rope,” the 33-year-old Army veteran went on. “I made the decision to go on hospice care, to stop feeding and fade away. This way, instead of committing the conventional suicide and I am out of the picture, people have a way to stop by or call and say their goodbyes. I felt this was a fairer way to treat people than to just go out with a note. After the anoxic brain injury in 2008 [a complication that Young suffered] I lost a lot of dexterity and strength in my upper body. So I wouldn’t be able to shoot myself or even open the pill bottle to give myself an overdose. The only way I could think of doing it was to have [his wife] Claudia open the pill bottle for me, but I didn’t want her implicated.”

It’s absolutely appalling that war criminals got away with sending young men like Tomas to a war for no reason other than to make some very powerful people much, much wealthier.

We should be ashamed of ourselves for allowing all of this to happen, even those of us who fought it at the time, because we didn’t fight harder.

But for those who send men like Tomas into battle for Halliburton, and Raytheon, and Lockheed Martin, and Northrup Grumman, and Mobil, Exxon, and Shell, there is no shame.

Sadly, Young passed away on November 10, 2014, but his words ring just as true today as when he first penned them over three years ago.

Indeed, his letter received confirmation this week with the release of  Sir John Chilcot‘s much anticipated report on the 2003 Iraq War and occupation earlier this week.

His investigation determined that the Iraq invasion was launched “before the peaceful options for disarmament had been exhausted” and that “Military action at that time was not a last resort.”

The Executive Summary of the report goes on to state that: “The consequences of the invasion […] left families bereaved and many individuals wounded, mentally as well as physically. After harsh deprivation under Saddam Hussein’s regime, the Iraqi people suffered further years of violence.”

As The Guardian reports, “the war’s disastrous consequences” included the deaths of “at least 150,000 Iraqis – and probably many more – most of them civilians” and “more than a million people displaced”. “The people of Iraq have suffered greatly,” the report concluded.

However, negative sentiment in the USA has been around for years, such that expressed by Tomas Young.

You can watch his poignant message, below: