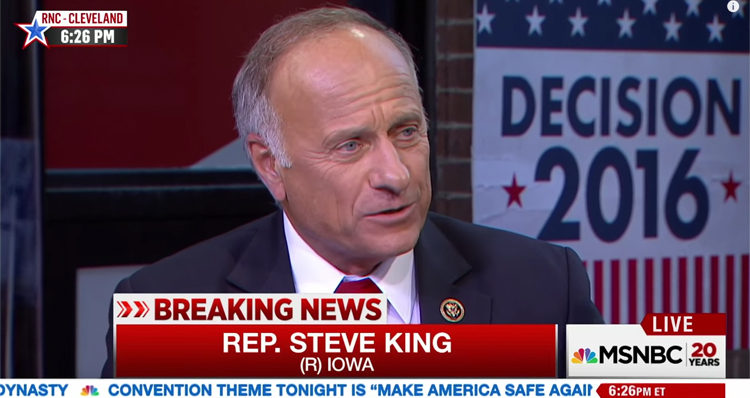 U.S. Representative Steve King (R-IA) ignited a firestorm when he declared that white people had contributed more to civilization than any other sub-group of people.

The Tea Party Congressman made the remarks during a roundtable discussion hosted by MSNBC’s Chris Hayes.

The panel was discussing “the uniformly white leadership of the Republican Party” when fellow panelist Charlie Pierce, a writer for Esquire, stated: “If you’re really optimistic, you can say this was the last time that old white people would command the Republican Party’s attention, its platform, its public face.”

King responded: “This whole ‘old white people’ business does get a little tired, Charlie. I’d ask you to go back through history and figure out where are these contributions that have been made by these other categories of people that you are talking about? Where did any other subgroup of people contribute more to civilization?”

As The New York Times reported: “Frantic yelling ensued, with the panelists speaking over one another. ‘What about Africa? What about Asia?’ April Ryan, a reporter on the panel, said.”

Chris Hayes ended the discussion telling the panel and viewers: “We’re not going to argue the history of civilization. Let me note for the record that if you’re looking at the ledger of Western civilization, for every flourishing democracy you’ve got Hitler and Stalin as well. So there’s a lot on both sides.”

You can watch Rep. King in action, below: