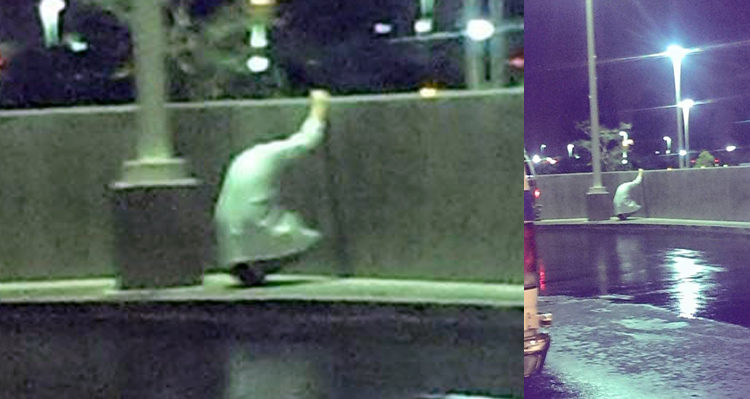 A photo showing a doctor grieving over the loss of a 19 year old patient inspires other doctors to share their grief in outpouring of support.

All too often, doctors are unsung heroes – only seen in times if ill health, often serving as reminders of death and disease.

A heart-breaking photo taken by an EMT, showing the instant an Emergency Room doctor stepped outside after losing a 19-year-old patient exploded on the internet last year after a fellow EMT posted the image to Reddit and Imgur.

The March 19th, 2015 photo, posted with permission, by Reddit user NickMoore911 received over 4,000 upvotes, with Moore providing the following text:

An ER doctor steps outside after losing a 19-year old patient. (Posted by a close friend and coworker on Facebook; We are both EMTs)

The man pictured was unable to save one of his patients. Though this is a common occurrence in our field of work, the patients we lose are typically old, sick, or some combination of the two. The patient that died was 19 years old, and for him, it was one of those calls we get sometimes that just hits you.

As The Independent reported at the time, there was an outpouring of support as other medical professionals recounted their own personal experiences of grief as the image went viral.

One Reddit user, boldwhite – a doctor, shared the following:

I’m a doctor. I know what that person is feeling. Yesterday one of my 17 month old patients died. I was in the bathroom crying in private between patients several time yesterday. I’ve cried in stairwells and hallways. It eats at you. Life is very fragile and the pain of loosing those we are trying to help becomes a scar that doesn’t go away. It has shaped who I am as a person.

We are trained for years during residency to preserve life. We do it as much as we can, and resuscitation becomes so ingrained in us that work becomes machine-like. We empathize with our patients, yes, but we put our own emotions to the side. Because if we felt any swing in emotion – whether it be anger, extreme sadness, or pride – that might impair the way we care for the next patient we see.

Patients will come and go – we will save a lot of them, but some we cannot save. And it’s at this moment, this one moment, that we actually feel.

I know I’m speaking in general here, and I know that we aren’t all the same. However, when it comes to our work, nothing is harder – and I mean nothing – than telling a loved one that their family member is dead. Give me a bloody airway to intubate. Give me the heroin addict who needed IV access yesterday, but no one can get an IV. Give me the child with anaphylaxis. But don’t give me the unexpected death.

The patient might die. We can only do so much, and we can only hope to do our best. But it’s that moment, when you stop resuscitation, and you look around, you look down at your shoes to make sure there’s no blood on them before talking with family, you put your coat back on and you take a deep breath, because you know that you have to tell a family that literally the worst thing imaginable has happened. And it’s in that moment that I feel. And I feel like the guy in this picture.

Every death is bad, but the things that have hit me the hardest are not necessarily young deaths, but those where half of an old couple who have been together a lifetime passes and I can see in the survivors eyes that they spent this life desperately in love. The bereft look in their eyes and the quiet desperation they have for just one more moment with their spouse kills me.

There is nothing like working on a case for hours to then have the patient die. This picture sums up my emotions and i am sure the emotions of many others working in the medical field. As a comment earlier, we are never formally trained to deal with loss and/or with giving the worst news of a families life to them. After which, we then have to go on with our lives. And delivering the news of a child who we “lost” or could not save is the one of the worst. Nothing can prepare the parents or families for this news and it is emotionally draining on all medical personnel as well. Yet, we have to remain strong and deliver the news straight faced with minimal emotion.