Hospitalized Soldier, Thought To Be Unconscious, Surprises With ‘Salute Seen Round The World’ – Video 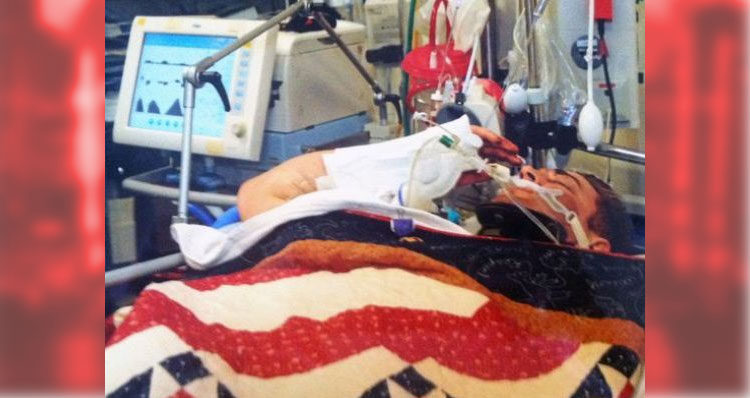 We decided to republish an updated version of this article from 2013 telling the story of three brave American heroes who served in Afghanistan.

Army Ranger Cpl. Josh Hargis was severely wounded losing both legs from the knee down during a night mission in Southern Afghanistan on October 6, 2013, along with other members of the 3rd Battalion, 75th Ranger Regiment. A total of four soldiers were killed in the attack and forty were injured.

A profoundly moving photo of Hargis saluting his commanding officer, Col. Christopher S. Vanek, warmed the hearts of people around the world after the image was sent to news agencies.

As CNN reported at the time, “If one image can tell an entire story, this is a powerful example.”

The photo is set in a hospital room. A patient with a neck brace, tubes attached everywhere, draped in a red, white and blue quilt, is lying in a bed. His bandaged right arm is raised in what we now know is a salute.

His face is mostly obscured, but the photo captures details such as the color of the patient’s hair, the shadow of what appears to be a large bruise on his left cheek and a Purple Heart medal pinned to the quilt.

Taylor posted the photo to her Facebook page, writing: “I received this picture today along with a letter from the commander of the team Josh was a part of on the night of his injuries. A letter to explain to me what kind of man I have the privilege of being married to. He explained to me what happened and what was going on in the picture.”

She then posted the contents of the letter she received from Col. Vanek, the Commander of the 75th Ranger Regiment.

“Josh was seriously wounded as you know and survived for almost two hours after his injury before arriving to the hospital. Josh was immediately pushed through a series of surgeries and emerged hours later into an intensive care unit here at our base in Afghanistan. Despite being in intense pain and mental duress, Josh remained alert and compassionate to the limited Rangers that were allowed to visit him bedside.

“Prior to Josh being moved to Germany for his eventual flight to America, we conducted a ceremony to award him with the Purple Heart for wounds received in action. A simple ceremony, you can picture a room full of Rangers, leaders, doctors, and nurses surrounding his bedside while the Ranger Regimental Commander pinned the Purple Heart to his blanket.

“During the presentation the Commander publishes the official orders verbally and leaned over Josh to thank him for his sacrifice. Josh, whom everybody in the room (over 50 people) assumed to be unconscious, began to move his right arm under the blanket in a diligent effort to salute the Commander as is customary during these ceremonies. Despite his wounds, wrappings, tubes, and pain, Josh fought the doctor who was trying to restrain his right arm and rendered the most beautiful salute any person in that room had ever seen.

“I cannot impart on you the level of emotion that poured through the intensive care unit that day. Grown men began to weep and we were speechless at a gesture that speak volumes about Josh’s courage and character. The picture, which we believe belongs on every news channel and every news paper is attached. I have it hanging above my desk now and will remember it as the single greatest event I have witnessed in my ten years in the Army.”

Taylor also referred people to an article from the Guardian of Valor website, noting that “There are many articles that have false or incorrect information. We want his story shared but only with the correct info.”

A nurse who was attending Hargis during the ceremony contacted the Guardian of Valor, requesting they share the following with Taylor and Josh:

“I wanted to share with you and the family of Ranger Hargis that it was an Honor for me to be at his bedside during his purple heart ceremony. As a Navy Nurse here at Role 3 hospital, it was I that was holding his arm as he began to raise it up during the ceremony.

“Fearing he would dislodge critical components required for health, I steadfastly held his hand, while he continued to raise it I whispered in his ear letting him know what was happening. I then realized he was attempting to render salute, so I ensured all medical equipment was safe and secure from being dislodged. This was a pinnacle of pride and valor to witness and I am honored to [have] cared for Ranger Hargis. I am honored to be here at Role 3 as a Navy Nurse to give the best care to our warriors. STAY STRONG RANGER HARGIS!”

Army Times provided additional information on the attack in a 2015 report detailing the bravery of Sgt. Bryan Anderson, a medic, and Staff Sgt. Jeffery Dawson, an explosive ordnance disposal technician. Both received the Distinguished Service Cross, a valor award second only to the Medal of Honor, for their bravery that fateful day.

“I wasn’t concerned with my life,” Anderson said, adding: “I was concerned that I had buddies who were bleeding out back on the compound.”

“The night of Oct. 5, 2013, started out as ‘any other night,’ Anderson said — yet another night mission to kill or capture a high-value enemy target in Afghanistan.

“But the mission in Kandahar province, which stretched into the early morning hours, would be anything but ordinary, as the team of Rangers assaulted in to find multiple suicide bombers and a deadly belt of buried improvised explosive devices.

Dawson and Anderson worked to clear pathways to victims of the attack through fields strewn with improvised explosive devices (IEDs). “As Dawson returned to the casualty collection point, Cpl. Joshua Hargis triggered another explosion as he tried to reach Peters,” a wounded soldier.

“The blast took off both Hargis’ legs. He also had a fractured pelvis and left hand, as well as shrapnel to his face and arms, Anderson said.”

“Dawson, who was less than five feet from the blast, suffered a ruptured ear drum and shrapnel wounds to his left side,” according to Army Times.

“I was pretty dazed,” Dawson said. “I was about 5 feet away when Hargis hit the plate. I was charged up pretty good. I don’t know what was going through my mind, honestly.”

“I got to Hargis, and I was looking at his legs, and I remember just reaching down and putting a tourniquet on his left leg while Anderson was applying pressure to his femoral artery,” Dawson said.

However, as Army times reports “the tourniquet broke, so Dawson applied pressure to Hargis’ femoral arteries while Anderson applied another tourniquet. Anderson continued to treat Hargis, giving him pain medication, freeze-dried plasma and other drugs.”

“I was working on him for an hour and a half,” Anderson said.

“It ended up being an hour and 37 minutes until we were off the ground with him,” Anderson said.

Speaking about the events of that night, Dawson said that he relied on his training.

“When you get into situations like this, you really revert back to your training and what you know, and you kind of just go on autopilot,” he said, adding “You know something needs to be done, you know how to do it, and it’s just doing it.”

As Army Times reports, “Anderson, who endured seven IED or suicide vest blasts from a distance of no more than 10 meters within a span of 30 minutes, agreed.”

“I know this is such a textbook answer, but it’s the truth,” he said. “I really did completely revert back to my training. We train for these situations all the time so that when it happens, on these one-in-a-million chances, you’re prepared to do what you need to do.”

Anderson also stated that the bonds between the Rangers was a key factor.

“I never even thought twice about running to one of those patients,” he said, adding: “The guys are basically my family, so when one of them is hurt, and I’m their medic, it’s my job to go make them better.”

You can watch a follow-up news report from March 2014, below: