September 8, 2016 by Samuel Warde No Comments 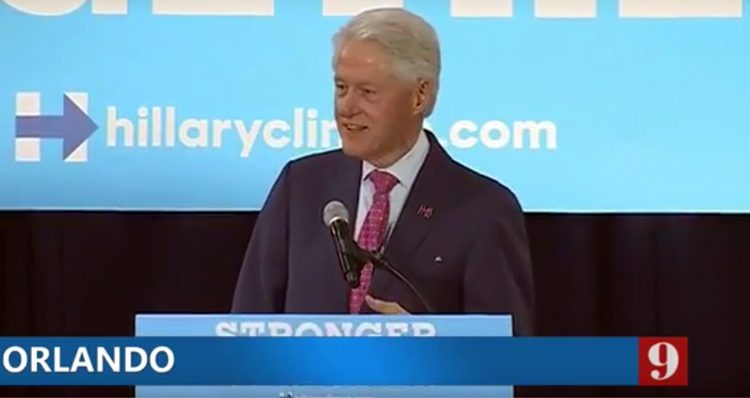 Former President Bill Clinton hit the campaign trail in Florida on Wednesday to champion his wife’s commitment to diversity.

NBC affiliate WESH reports that Clinton addressed a crowd of several hundred at the Dr. James R. Smith Community Center, located in the middle of the predominantly African-American and low-income Washington Shores neighborhood, telling them that “I’m the first president to visit this part of Orlando, and I thank you for that.”

As The Tampa Bay Times reports, Clinton “contrasted Hillary Clinton’s ‘Stronger Together’ campaign slogan to that of her Republican opponent, Donald Trump,” suggesting that Trump’s “Make America Great Again” slogan is a racist code word, “reflexive of a time more than a half-century ago when opportunities weren’t great for African-Americans.”

Clinton led into that portion of the speech by talking about his recent birthday.

“Some of you know that I just celebrated my 70th birthday,” he began. “I don’t know how I got so old and it really bothers me that Hillary’s opponent seems to be doing best among older people. They like that – some of them do – ‘Make America great again.'”

“I was raised to believe that if you spend all your time trying to recapture yesterday, you blow today and you forfeit tomorrow,” he continued. “I’m old enough to remember the good old days and they weren’t all that good in many ways.”

That message “Make America great again” is — if you’re a white Southerner, you know exactly what it means, don’t you? — What it means is, ‘I’ll give you an economy you had 50 years ago and I’ll move you back up on the social totem pole and other people down. What Hillary wants to do is take the totem pole down and let us all go forward together!