It Took A Woman To Tame Sexist Beast Donald Trump

September 22, 2016 by Kimberley Johnson No Comments 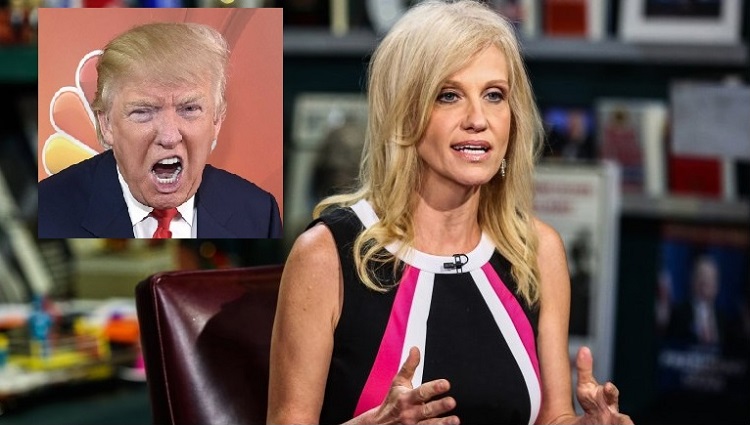 Isn’t it ironic that a woman, not a man, was the only person who’s been able to get the very sexist Donald Trump to tone down his hate-filled, angry clown act?

Hiring Kellyanne Conway to run his campaign was perhaps the best decision Trump has made since he threw his hat in the presidential ring last year. Everyone – including Republicans – figured Trump would pivot to presidential mode after behaving like an over-sized toddler in the circus-like Republican primaries. Much to the GOP’s chagrin, Trump continued his childish antics — which eventually resulted in a family intervention and a new campaign manager

Working as a Republican strategist and pollster, Conway has been in politics for more than two decades. On August 17, 2016, she became Trump’s campaign manager.

The politically savvy Conway was hired to tame the Trump beast, and she had her work cut out for her. In July, Trump stunned the nation when he angered his own party, as well as members of the military, by his response to the charge made by Khizr Khan, the father of a Muslim soldier killed in Iraq, that Trump had “sacrificed nothing” for his country. Trump’s answer was that he had made sacrifices by employing “thousands and thousands of people.” Trump also suggested that Khan’s wife, Ghazala Khan, didn’t speak at the convention because Islam forbids women from doing so.

The blowback Trump faced after his highly insulting comments about the Khan family was severe, and it was clear something needed to change if he wanted to stay in the race. That change came in the form of a woman – a woman so good at what she does that she was able to reverse the damage and get the lying con-artist back into the game.

Since Conway has taken over, we’ve seen a marked difference in Trump’s behavior and tone. While he’s still volatile, rude and horrid, his overall “performance” looks like the presidential pivot (well, the Trump version of presidential) everyone expected from him last July. Of course, he slips up now and then – maybe because he can’t help himself, or maybe because he’s throwing little nuggets to his racist, sexist base, or maybe a little of both. Any way you look at it, his demeanor on the campaign trail has softened. No doubt it’s because of Conway.

Trump’s behavior has changed because he’s taking the advice of a woman.

The takeaway is quite simple and, from this feminist’s standpoint, quite delicious: Without Conway, Trump and his He-Man Woman Haters Club were unable to run a successful campaign in the general election. I suspect the strategic decision to contract a female campaign manger might help him pick off some of the coveted undecided women voters – a monumental task, considering what he’s said about women in the past. Maybe this move will prove successful in November, or maybe not. Either way, it’s clear Kellyanne Conway is the best person to sell a sexist, white supremacist manchild to the American public.

In case you need just a few examples of Trump’s blatant sexism and misogyny:

“Putting a wife to work is a very dangerous thing.” 1994 interview with ABC News.

26,000 unreported sexual assults in the military-only 238 convictions. What did these geniuses expect when they put men & women together?

“You know, it doesn’t really matter what [the media] writes as long as you’ve got a young and beautiful piece of ass.” — from an interview with Esquire, 1991

“Women have one of the great acts of all time. The smart ones act very feminine and needy, but inside they are real killers. The person who came up with the expression ‘the weaker sex’ was either very naive or had to be kidding. I have seen women manipulate men with just a twitch of their eye — or perhaps another body part.” — Trump: The Art of the Comeback, 1997

“My favorite part [of ‘Pulp Fiction’] is when Sam has his gun out in the diner and he tells the guy to tell his girlfriend to shut up. Tell that bitch to be cool. Say: ‘Bitch be cool.’ I love those lines.” — TrumpNation: The Art of Being The Donald, 2005.

“All of the women on ‘The Apprentice’ flirted with me — consciously or unconsciously. That’s to be expected.” — How To Get Rich, 2004

I could list many more heinous Trump quotes, but you probably have a life.

Just remember that, for all his bravado and hot air, this wannabe macho man’s campaign was going down in flames before it was decided that a woman needed come in to save it.

I am no fan of Kellyanne Conway’s personal politics, but there’s no denying she knows how to spin better than most men; and she also knows how to keep Trump’s foot out of his big, fat, sexist mouth.

It takes a woman. Literally.