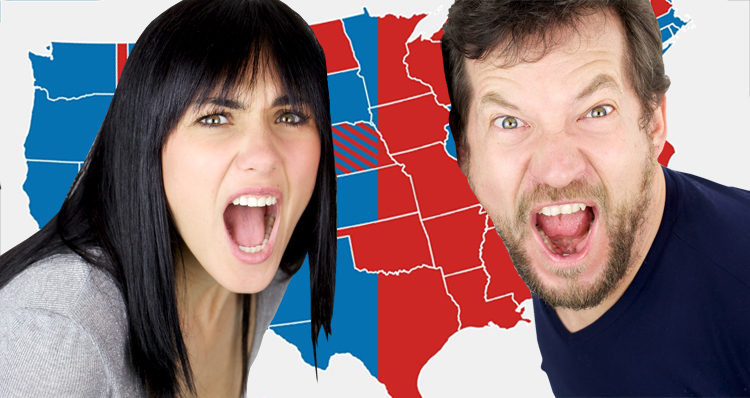 Polling expert Nate Silver reveals what the electorate maps would look like if only women could vote versus if only men could vote.

Nate Silver, the statistician and polling expert who successfully predicted the outcome in 49 of 50 states during the 2008 presidential elections, reports that “A series of national polls released on Tuesday showed Hillary Clinton leading Donald Trump by margins ranging from 5 to 11 percentage points” giving her “an 84 percent chance of winning the White House,” according to his polls-only model and an 80 percent chance of winning according to his polls-plus forecast.

However, as Silver continues, a Public Religion Research Institute poll conducted on behalf of The Atlantic caught his eye due to its “massive gender split.”

It showed a massive gender split, with Clinton trailing Trump by 11 percentage points among men but leading him by 33 points among women. To put those numbers in perspective, that’s saying Trump would defeat Clinton among men by a margin similar to Dwight D. Eisenhower’s landslide victory over Adlai Stevenson in 1952, while Clinton would defeat Trump among women by a margin similar to … actually, there’s no good comparison, since no candidate has won a presidential election by more than 26 percentage points since the popular vote became a widespread means of voting in 1824. To get to 33 points, you’d have to take the Eisenhower-Stevenson margin and add Lyndon B. Johnson’s 23-point win over Barry Goldwater in 1964 on top of it.

Silver goes on to report the results of 12 live polls “showing a notably wider gender spread than online and automated polls,” adding that on the average, “Clinton leads Trump by 15 percentage points among women while trailing him by 5 points among men.”

To show how this might look on an electoral map, Silver uses the following computation:

Here’s a quick way to estimate it. In the polls I cited above, Clinton is doing 10 points better among women than among the electorate overall.2 So we’ll add 10 points to her current polls-only margin in every state to forecast her performance if women were the only ones who could vote. In addition to the states where Clinton is already leading Trump, that would put her ahead in Alaska, Arizona, Georgia, Kansas, Indiana, Missouri, Montana, South Carolina, South Dakota, Texas and the 2nd congressional districts in Maine and Nebraska. Clinton would win 458 electoral votes to just 80 for Trump.

Here's what the map would look line if only women voted: https://t.co/sjVY67qouE pic.twitter.com/rrc3GuXmGl