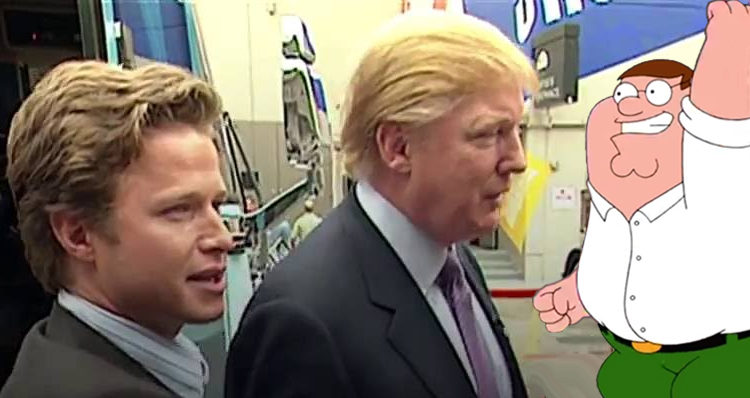 Family Guy Peter Griffin gets on the Access Hollywood bus with Donald Trump and Billy Bush.

As Entertainment Weekly reports, “Sunday night’s episode of the animated Fox comedy included a live-action journey into that real-life scandal involving an Access Hollywood bus, Trump, and Bush (who is currently suspended from his Today show hosting duties): The show replayed the actual audio of the incident, but with one small (or rather, large) addition: Peter Griffin.”

The tape begins with Peter suggesting that they have some “locker room talk.”

When Trump talks about “moving on her,” Peter interrupts, responding: ““Whoa, whoa, whoa, that’s not ‘locker room talk.’ I meant like ‘good play,’ ‘good pass,’ like that kinda thing.”

Peter went on to give Trump props for hitting on a married woman, pitched his idea for a thing called Twitter – a place where “crazy people can bash ladies and minorities at 3 a.m.,” and he mocked Trump for being unable to open the bus door, laughing and saying “He can’t open it because of his tiny hands.”

You can listen to Peter, voiced by MacFarlane, talking with Trump and Bush in the clip below, followed by a version posted on Twitter by MacFarlane without all the bleeps.

And the other version: