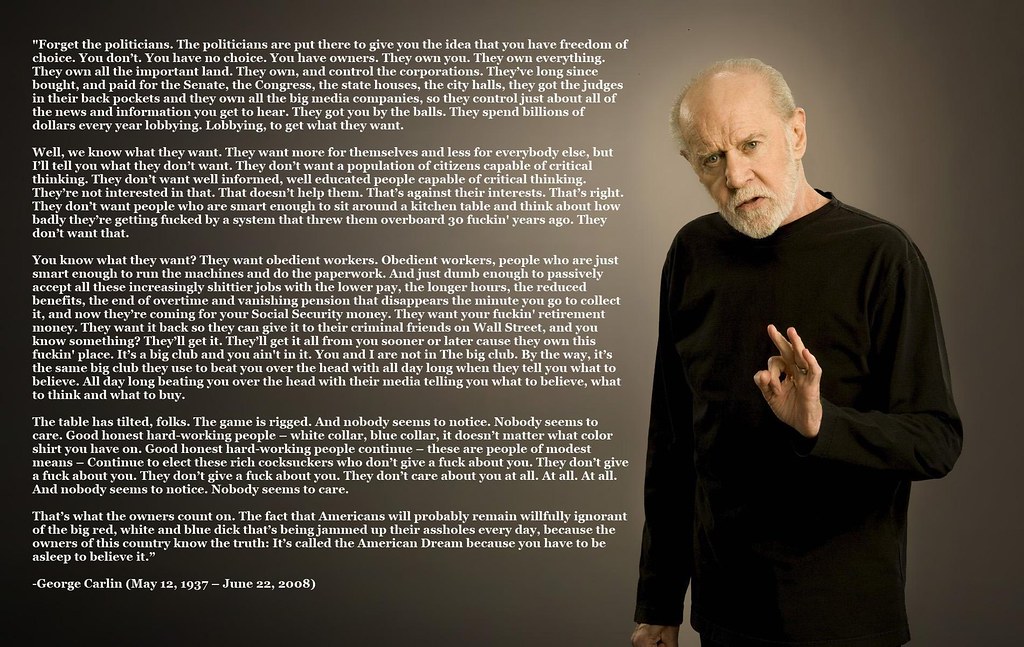 Comedian and social commentator George Carlin died of heart failure at Saint John’s Hospital in Santa Monica in 2008 at the age of 71 but not before leaving his mark on the world.

2. “The most unfair thing about life is the way it ends. I mean, life is tough. It takes up a lot of your time. What do you get at the end of it? A Death! What’s that, a bonus? I think the life cycle is all backwards. You should die first, get it out of the way. Then you live in an old age home. You get kicked out when you’re too young, you get a gold watch, you go to work. You work forty years until you’re young enough to enjoy your retirement. You do drugs, alcohol, you party, you get ready for high school. You go to grade school, you become a kid, you play, you have no responsibilities, you become a little baby, you go back into the womb, you spend your last nine months floating …and you finish off as an orgasm.”

4. “We’re so self-important. So arrogant. Everybody’s going to save something now. Save the trees, save the bees, save the whales, save the snails. And the supreme arrogance? Save the planet! Are these people kidding? Save the planet? We don’t even know how to take care of ourselves; we haven’t learned how to care for one another. We’re gonna save the fuckin’ planet? . . . And, by the way, there’s nothing wrong with the planet in the first place. The planet is fine. The people are fucked! Compared with the people, the planet is doin’ great. It’s been here over four billion years . . . The planet isn’t goin’ anywhere, folks. We are! We’re goin’ away. Pack your shit, we’re goin’ away. And we won’t leave much of a trace. Thank God for that. Nothing left. Maybe a little Styrofoam. The planet will be here, and we’ll be gone. Another failed mutation; another closed-end biological mistake.”

5. “Atheism is a non-prophet organization.”

6. “Religion has actually convinced people that there’s an invisible man living in the sky who watches everything you do, every minute of every day. And the invisible man has a special list of ten things he does not want you to do. And if you do any of these ten things, he has a special place, full of fire and smoke and burning and torture and anguish, where he will send you to live and suffer and burn and choke and scream and cry forever and ever ’til the end of time! But He loves you. He loves you, and He needs money! He always needs money! He’s all-powerful, all-perfect, all-knowing, and all-wise, somehow just can’t handle money!”

8. “Think of how it all started: America was founded by slave owners who informed us, “All men are created equal.” All “men,” except Indians, n*ggers, and women. Remember, the founders were a small group of unelected, white, male, land-holding slave owners who also, by the way, suggested their class be the only one allowed to vote. To my mind, that is what’s known as being stunningly–and embarrassingly–full of shit.”

9. “When you’re born into this world, you’re given a ticket to the freak show. If you’re born in America you get a front row seat.”

10. “I am a personal optimist but a skeptic about all else. What may sound to some like anger is really nothing more than sympathetic contempt. I view my species with a combination of wonder and pity, and I root for its destruction. And please don’t confuse my point of view with cynicism; the real cynics are the ones who tell you everything’s gonna be all right.”

11. “Inside every cynical person, there is a disappointed idealist.”

12. “Forget the politicians. The politicians are put there to give you the idea you have freedom of choice. You don’t. You have no choice. You have owners. They own you. They own everything. They own all the important land, they own and control the corporations that’ve long since bought and paid for, the senate, the congress, the state houses, the city halls, they got the judges in their back pocket, and they own all the big media companies so they control just about all of the news and the information you get to hear. They got you by the balls. They spend billions of dollars every year lobbying to get what they want. Well, we know what they want. They want more for themselves and less for everybody else. But I’ll tell you what they don’t want. They don’t want a population of citizens capable of critical thinking. They don’t want well informed, well educated people capable of critical thinking. They’re not interested in that. That doesn’t help them.”

13. “Just cause you got the monkey off your back doesn’t mean the circus has left town.”

14. “Here’s a phrase that apparently the airlines simply made up: near miss. They say that if 2 planes almost collide, it’s a near miss. Bullshit, my friend. It’s a near hit! A collision is a near miss.
[WHAM! CRUNCH!]
“Look, they nearly missed!”
“Yes, but not quite.”

15. “Life is not measured by the breathes you take, but by the moments that take your breathe away.”

17. “By and large, language is a tool for concealing the truth.”

18. “Here’s another question I have. How come when it’s us, it’s an abortion, and when it’s a chicken, it’s an omelette? Are we so much better than chickens all of a sudden? When did this happen, that we passed chickens in goodness. Name 6 ways we’re better than chickens. See, nobody can do it! You know why? ‘Cause chickens are decent people. You don’t see chickens hanging around in drug gangs, do you? No, you don’t see a chicken strapping some guy into a chair and hooking up his nuts to a car battery, do you? When’s the last chicken you heard about come home from work and beat the shit out of his hen, huh? Doesn’t happen, ’cause chickens are decent people.”

20. “Political correctness is America’s newest form of intolerance, and it is especially pernicious because it comes disguised as tolerance. It presents itself as fairness, yet attempts to restrict and control people’s language with strict codes and rigid rules. I’m not sure that’s the way to fight discrimination. I’m not sure silencing people or forcing them to alter their speech is the best method for solving problems that go much deeper than speech.”

22. “Females create life, males end it. War, crime, violence, are primarily male franchises. Man shit. It’s nature’s supreme joke. Deep in the womb, men start out as the good thing, and wind up as the crappy thing. Not all men. Just enough. Just enough to fuck things up.”

23. “Most people with low self-esteem have earned it.”

24. “TOMORROW IS ANOTHER DAY. Not true. Today is another day. We have no idea what tomorrow is going to be. It might turn out to be another day, but we can’t be sure. If it happens, I’ll be the first to say so. But, you know what? By that time, it’ll be today again”

25. “Every day I beat my own previous record for the number of consecutive days I’ve stayed alive.”

BONUS: “In America, anyone can become president. That’s the problem.