November 3, 2016 by Kimberley Johnson No Comments 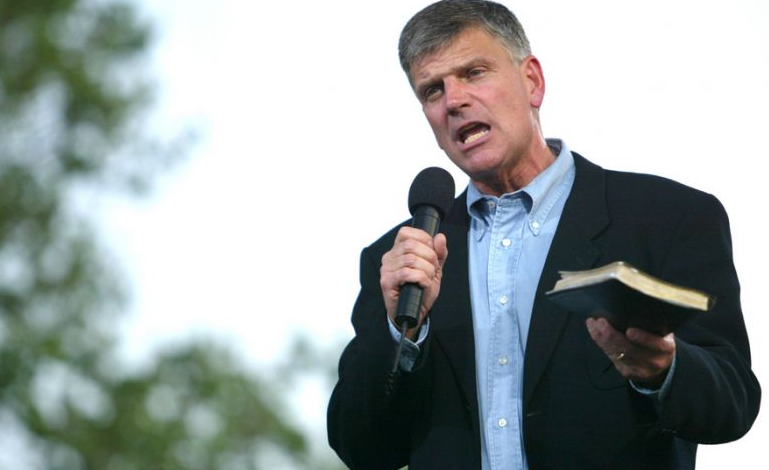 Franklin Graham is a Christian evangelical extremist, and on a recent broadcast of the American Family Association’s “Pray and Vote” he said that conservative Christians are “on the precipice of losing the United States of America.”

While Graham’s  overall message is hysterical and not at all true – because Christian evangelicals do not own the U.S. – he does make an important point about this and future elections.

Graham correctly pointed out that Americans will be voting for “somebody who’s going to be appointing the next Supreme Court justices.”

He went on about how this election is the most important in our lifetime because, “we have a chance to get pro-life judges” on the Supreme Court – which translates into overturning Roe v. Wade.

“This election is not about Hillary’s lost emails,” he said.

But then Graham insisted, “… and it’s not about Donald Trump’s potty mouth.”

Back up – Donald Trump admitted to, and bragged about, sexually assaulting women. Trump also boasted about owning a beauty pageant so that he could lurk backstage and watch underage girls disrobe. That isn’t being a potty mouth – that’s criminal behavior, and it’s fucking creepy. Graham is urging Christian evangelicals to overlook Trump’s criminal, predatory behavior in the name of “life.” In other words: It’s acceptable to assault women, to grab them without consent, to kiss them without consent, and to behave like a pervert — as long as the outcome is a national abortion ban.

Not that this is some big surprise. Christians and the anti-choice crowd have been looking to ban abortion since the Roe v. Wade decision was handed down, but Graham is 100% correct when he says this election is the most important of our lifetime. If an admitted sexual predator wins the White House, we can say goodbye to decades of progress – not just a rollback on women’s rights – a rollback on civil rights in general, to say nothing of abandoning any pretense of decency.

Graham didn’t officially endorse Trump; but it’s clear that he is pushing his followers to vote for Trump, and their main goal is to take away a woman’s legal right to choose abortion.