These Joe Biden Memes Mocking Trump Are Killing Me! 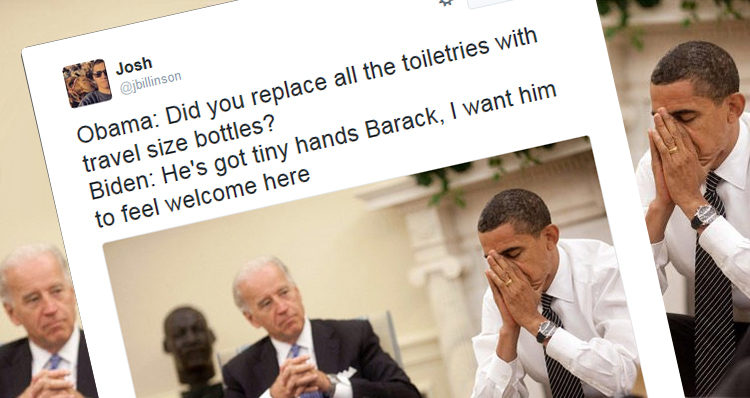 You gotta love Joe Biden – and these memes are cracking me up.

An amateur photographer based out of the Washington D.C. metro area named Joshua Billinson has become the latest Twitter star with his Joe Biden memes.

In the wake of Hillary Clinton’s stunning defeat, Billinson has taken to his Twitter account, publishing a series of memes focusing on Vice President Joe Biden’s response to a Trump presidency.

Billinson began the series on November 10th with the following tweet:

Obama: ‘They just called it for Trump, he won”
Biden: “Well I’m not going to call him President, ever! Not even if there’s a fire!”

In his memes, he covers a wide range of topics from Trump’s leading role in the birther movement to Trump’s tiny hands and …..

"I left a Kenyan passport in your desk, just to fuck with him"
"Joe"
"Oh and a prayer rug in your bedroom. He's gonna lose it!"
"Dammit Joe" pic.twitter.com/mEWo91OLuA

Obama: Did you replace all the toiletries with travel size bottles?
Biden: He's got tiny hands Barack, I want him to feel welcome here pic.twitter.com/e7NRIZ43Ww

Biden: Trump has some big shoes to fill
Obama: You're too kind, Joe
Biden: No really, what do you wear, a 13? He can't be bigger than a 9 pic.twitter.com/GrgeLbibcq

There are several that cover a hilarious range of practical jokes being played on Trump by Biden.

Biden: "Guess who just upper-decked the toilet outside the Oval Office?"
Obama: "Dammit Joe, I have to live here for two more months" pic.twitter.com/xBGOslRIRa

Biden: Ideally I'd like to include traps from all of the Home Alone movies, but we've only got two months so the Home Alone 2 plan is fine pic.twitter.com/iFkkJNmkvl

"I know Joe called and ordered 500 pizzas to be delivered on January 21st, but I need you to cancel that order." pic.twitter.com/UQc7GoDSIn

"Yes Mr. Trump, I took Joe's pocket knife away and we'll get you some new tires for that limo right away, but I can't make him say sorry" pic.twitter.com/wULtfJqu85

Biden: Hillary was saying they took the W's off the keyboards when Bush won!
Obama: Joe put-
Biden: I TOOK THE T'S, THEY CAN ONLY TYPE RUMP pic.twitter.com/D6Vh7Zu429

He also takes on VP-Elect Pence:

Biden: When they start talking about the Inaugural Balls, don't grab your crotch and smile
Pence: Why wou-
Biden: IT'S MY JOKE. DON'T DO IT pic.twitter.com/eFkBIie517

Obama: How'd your meeting with Joe go?
Pence: He had the craziest look in his eyes, and at one point he said, "Let's get it on" pic.twitter.com/yxzdSQm4Li