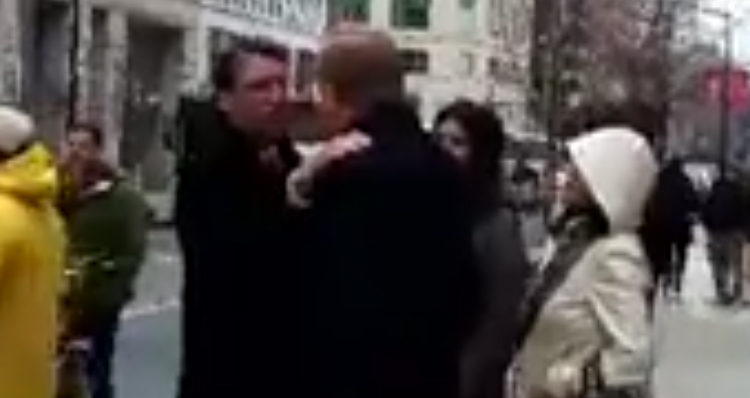 Former N.C. Gov. Pat McCrory and conservative host Lou Dobbs did not receive the welcome they may have wanted when they arrived in Washington D.C. for the inauguration.

The Raleigh News & Observer reports that last Friday a video was posted to Facebook by Udai Basavaraj at about about 4p.m. that was tagged at the Capital Hilton in Washington D.C.

In the more-than-three-minute video, McCrory, television personality and conservative pundit Lou Dobbs and three unidentified women are approached by people on the street who shout “Shame!” and call McCrory an “anti-gay bigot.” McCrory and his group try to avoid the group of people shouting, but are followed down an alley where they waited to be admitted to the building.

The Raleigh News & Observer adds that “McCrory and North Carolina have been maligned on a national stage over House Bill 2, or ‘the bathroom bill’” which McCrory signed into law after it was passed by the Republican-majority General Assembly. The bill was criticized for nullifying local non-discrimination ordinances statewide, directing transgender people to use restrooms and locker rooms matching the gender on their birth certificate in government-owned buildings and initially revoking the right to sue in state court for discrimination.”

The News & Observer report that “none of the people shouting physically engaged with anyone in McCrory’s group in the video,” that “police eventually intervened and shooed the crowd away, though not before some of the protesters accused them of ‘protecting the homophobes.'”

Ricky Diaz, who served as a spokesman for McCrory during his campaign for re-election, issued this statement Sunday by email:

“It’s regrettable that up to a few dozen protesters decided to stalk and shout insults at the governor and police when we should all be listening to each other and coming together as a country in a respectful manner. Governor McCrory is thankful to Lou Dobbs for helping during this incident, and very thankful to the D.C. police for keeping everyone safe during a very successful inaugural weekend.”