Jon Stewart Mocks ‘A**hole’ Trump, Tells The Media: ‘It’s Time To Get Your Groove Back’ – Video 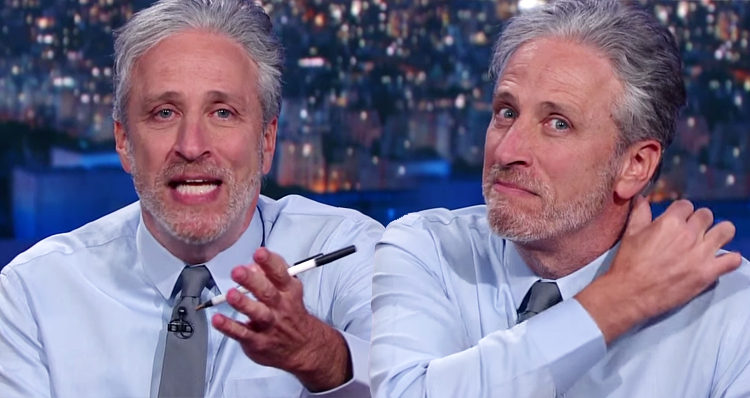 Jon Stewart made an appearance on The Late Show to tell the media how to break up with a**hole Trump.

Jon Stewart returned to Stephen Colbert’s The Late Show on Monday for the second time in less than a month, to mock the media’s breakup with Trump.

Colbert was discussing the First Amendment at the beginning of the segment.

“It’s like they say, if you love the First Amendment, set it free. If it comes back, don’t let it in the press briefing,’ he stated, adding that  “the root of all this is that Trump calls any story he doesn’t like ‘fake news.’”

Stewart suddenly burst from beneath Colbert’s desk. Answering Colbert’s question whether he missed “it” [television], he replied, “yes, I miss it.”

“Stephen – I’ve spent the whole day yelling to the animals about Trump,” he added, referring to life on his farm.

Asked what he thinks about Trump banning members of the media from last Friday’s press briefing and his decision not to attend this year’s WH Correspondents Dinner, Stewart replied:

“I can’t believe the guy has the balls to get away with that. Trump lies more in one press conference than CNN does in a year, and this – as you know – comes from a guy who hates CNN.”

Colbert asked if he agreed that “Trump banning any members of the press is un-American,” Stewart mockingly responded: “Oh, it’s un-American not to like the press.”

“You know what I say? I say stop your whining, press! Can I talk to the media for a moment?”

Facing the camera, Stewart delivered one of his best rants ever.

Continuing, Stewart advises the media to take some time for “self-reflection and improvement” and to “take up a hobby. I recommend journalism.”

Here’s my point, media. Here’s my point. This breakup with Donald Trump has given you, the media, an amazing opportunity for self-reflection and improvement. Instead of worrying about whether Trump is un-American; or if he thinks you’re the enemy; or if he’s being mean to you; or if he’s going to let you go back into the briefings; do something for yourself. Self-improvement! Take up a hobby. I recommend journalism.