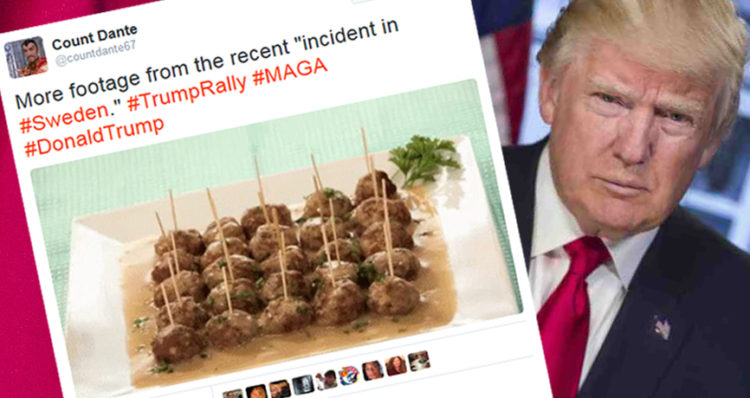 Trump is mercilessly mocked on Twitter after citing a non-existent terror attack in Sweden as justification for his Muslim ban.

Trump offered tough talk on refugee policies in Europe during a campaign-style rally in Melbourne, Florida, on Saturday.

“We’ve got to keep our country safe,” he told the crowd before running through a list of places that have been hit by terrorist.

The Guardian reports that: “There were questions about whether Trump had confused Sweden with Sehwan in Pakistan, where a suicide bomber blew himself up among devotees at the Sufi shrine on Friday, killing 80 people.”

The real kicker, however, might be the actual numbers. As The New York Times reports, “Contrary to Mr. Trump’s allegations, nearly all of the men involved in terrorist assaults in Paris on Nov. 13, 2015, in Brussels on March 22 last year, and in Nice, France, on July 14, were citizens of France or Belgium.”

The Guardian noted that: “according to the 2016 Swedish Crime Survey, crime rates in Sweden have stayed relatively stable over the last decade, with some fluctuations. In 2015, there were 112 cases of lethal violence in Sweden, an increase of 25 cases compared with 2014, but assaults, threats, sexual offences, car theft, burglary and harassment all reduced compared to the previous year – as did anxiety about crime in society.”

The New York Times reports that Twitter was fast to respond to Trump’s confusion – possible the result of watching a “Fox News interview of Ami Horowitz, a filmmaker who asserts that migrants in Sweden have been associated with an increase in crime, by the correspondent Tucker Carlson.”

“Some citizens of Sweden were baffled by the comments,” The Guardian reported, adding that: “One of the country’s official Twitter accounts, controlled by a different citizen each week, currently a school librarian, said: ‘Nothing has happened here in Sweden. There has not [been] any terrorist attacks here. At all.'”

No. Nothing has happened here in Sweden. There has not ben any terrorist attacks here. At all. The main news right now is about Melfest. ->

Carl Bildt, Sweden’s foreign minister from 2006 to October 2014 and Prime Minister from 1991 to 1994, tweeted: “Sweden? Terror attack? What has he been smoking? Questions abound.”

Sweden? Terror attack? What has he been smoking? Questions abound. https://t.co/XWgw8Fz7tj

The New York Times reports that the Swedish newspaper Aftonbladet noted that “Twitter users were quick to ridicule Mr. Trump’s remark, with joking references to the Swedish Chef, the ‘Muppets’ character; Swedish meatballs; and Ikea, the furniture giant.”

Trump reveals his source for the horrifying news of an attack on Sweden pic.twitter.com/4MxG8kvHc5

One Twitter user posted a photo of the Swedish pop group Abba:

Four extremists responsible for #swedenincident are still at large, if you see these people phone @realDonaldTrump at once pic.twitter.com/vXPhWOPak1

Then there were the survivors from the Kellyanne Conway’s fictitious Bowling Green massacre. (See The Washington Post for more info on her remarks.)

Chelsea Clinton weighed in, asking: “What happened in Sweden Friday night? Did they catch the Bowling Green Massacre perpetrators?”

What happened in Sweden Friday night? Did they catch the Bowling Green Massacre perpetrators?

Comedian Jeff Dwoskin tweeted: “Sadly, Last Night in Sweden all the remaining survivors of the Bowling Green Massacre were killed.”

Sadly, Last Night in Sweden all the remaining survivors of the Bowling Green Massacre were killed