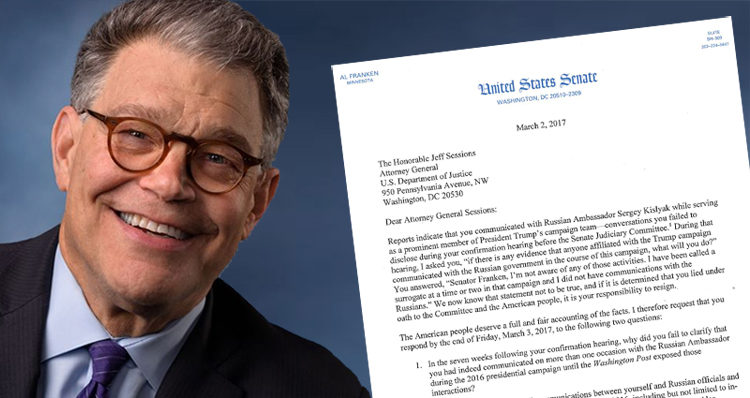 Updated, 03 March, 10:00pm: It appears that the efforts of Franken and others paid off and Sessions has now agreed to submit amended testimony and answer his questions and those of other senators looking for answers.

“In light of the letter received from Senators late this afternoon, the Attorney General will respond to their questions along with his amended testimony on Monday,” Justice Department spokesman Peter Carr said in a statement.

NBC News reported on Thursday that “Embattled Attorney General Jeff Sessions bowed to pressure Thursday and said he would recuse himself from any federal probe of Russian meddling in the presidential election” after it was revealed by The Washington Post a day before that he had lied to Congress about communications he had with the Russian ambassador to the U.S. before the presidential election.

However, that isn’t enough for many Democrats who are calling on Sessions to resign. (In a separate report, NBC News currently lists 86 Democratic Senators and Representatives who are calling for his resignation, and the list continues to grow.)

Minority Leader Nancy Pelosi issued the following statement on Thursday: “Attorney General Sessions’ narrow recusal and his sorry attempt to explain away his perjury are totally inadequate,” and Sen. Al Franken (D-MN) took to his Facebook page, posting an ultimatum to Sessions along with a link to a letter he sent to the embattled Republican Attorney General.

“Unlike President Trump, I do not have ‘total confidence’ in Attorney General Jeff Sessions,” his post began.

“Why?” he asked, rhetorically.

Because, at his confirmation hearing in January, I asked then-Senator Sessions a question about possible contact between the Trump team and Russia. We know now that, in his answer, he misled the American public and Congress (and really, that’s a best case scenario) about his own personal contact with Russian officials during last year’s presidential campaign.

Franken goes on to explain that Sessions is “trying to correct the record” nearly two months after the lie “only now – after The Washington Post dropped a bombshell report exposing that Attorney General Sessions met twice with the Russian ambassador in 2016.”

“So I just personally asked our attorney general for an explanation and for answers to clear things up. But if it’s determined that he lied under oath in his confirmation hearing, I believe he needs to resign his post,” he continued, concluding with the following ultimatum:

“I gave him until tomorrow evening to respond to my questions because Americans deserve these answers as quickly as possible.”

You can read Franken’s letter to Sessions by clicking here.

“1. In the seven weeks following your confirmation hearing, why did you fail to clarify that you had indeed communicated on more than one occasion with the Russian Ambassador during the 2016 presidential campaign until the Washington Post exposed those interactions?

“2. Describe in detail any and all communications between yourself and Russian officials and their associates during the presidential campaign of 2016, including but not limited to in-person conversations, phone calls, meetings, and electronic communications. Also include any such communications between members of your staff, including your Senate staff and any staff that assisted you during the campaign, and Russian officials and their associates.”