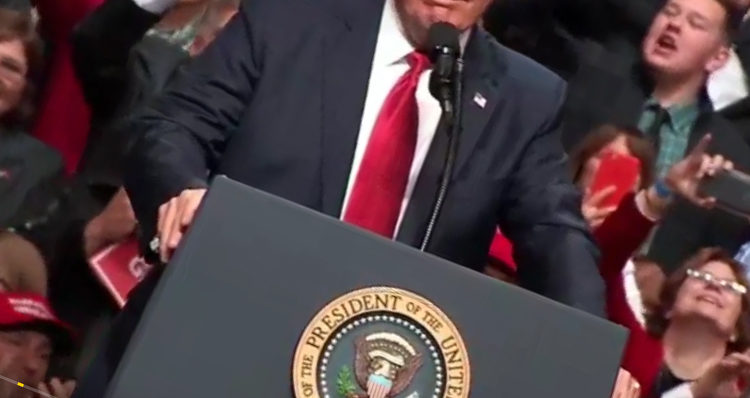 As it turns out, Trump’s big mouth may have just become his greatest enemy.

A federal judge in Hawaii blocked Trump’s new travel ban on Wednesday, due in large part to Trump’s past remarks and those of advisor and former New York Mayor Rudy Giuliani, and Trump’s response may have just guaranteed the permanent failure of his bigoted ban.

Watson did not rule on the constitutionality of the ban, but did say the ban constituted religious discrimination:

There is significant and unrebutted evidence of religious animus driving the promulgation of the executive order and its related predecessor … The illogic of the government’s contentions is palpable. The notion that one can demonstrate animus toward any group of people only by targeting all of them at once is fundamentally flawed.

The Guardian reports that “The judge’s ruling cited several comments made by Trump himself, as well as senior advisers Stephen Miller and Rudy Giuliani, indicating that the motivation for the executive order was to ban Muslims.”

Any reasonable, objective observer would conclude, as does the court for purposes of the instant motion for TRO, that the stated secular purpose of the executive order is, at the very least, ‘secondary to a religious objective’ of temporarily suspending the entry of Muslims.

Watson cited public statements by Trump that he said proved that the order was targeted at Muslims — including his comments after he signed the first executive order in January that he was “establishing a new vetting measure to keep radical Islamic terrorists out of the United States of America” because “we don’t want them here.”

Watson also cited remarks by former New York Mayor Rudy Giuliani, a prominent Trump supporter, who said in January: “When he [Trump] first announced it, he said, ‘Muslim ban.’ He called me up. He said, ‘Put a commission together. Show me the right way to do it legally.'”

The Washington Post reports that another federal judge issued a narrower ruling against Trump’s order on Thursday morning, again citing remarks made by Trump and his advisors.

Early Thursday, a federal judge in Maryland issued a second, narrower restraining order against the measure — suspending only the portion that stopped the issuance of visas to citizens of six Muslim-majority countries. In that case, U.S. District Judge Theodore D. Chuang also pointed to statements by Trump and his advisers made that, in Chuang’s opinion, indicated the executive order was “the realization of the long-envisioned Muslim ban.”

“These statements, which include explicit, direct statements of President Trump’s animus toward Muslims and intention to impose a ban on Muslims entering the United States, present a convincing case that the First Executive Order was issued to accomplish, as nearly as possible, President Trump’s promised Muslim ban,” Chuang wrote.

“Clearly Judge Watson was very focused on a lot of what had been said beforehand to say that it couldn’t be cured by simply inserting a lot of neutral language and then asking everybody to pretend it didn’t happen,” he stated.

Ellen Rosenblum, the attorney general of Oregon, one of 13 other states to file briefs in support of Hawaii’s motion, attended the press conference and stated that she agreed, adding that Trump’s new order was merely a cleaned-up version of his original executive order.

For his part, Trump denounced the ruling during a campaign-style rally held in Nashville, Tennessee on Wednesday night calling it “an unprecedented judicial overreach,” that “makes us look weak.”

Stunningly, in what the Guardian describes as “words that could hinder his cause,” Trump admitted that the new order was a “watered down version” of his original order.

“The order he blocked was a watered down version of the first order that was also blocked by another judge, and should have never been blocked to start with. This new order was tailored to the dictates of the 9th circuit’s, in my opinion flawed, ruling,” he admitted.