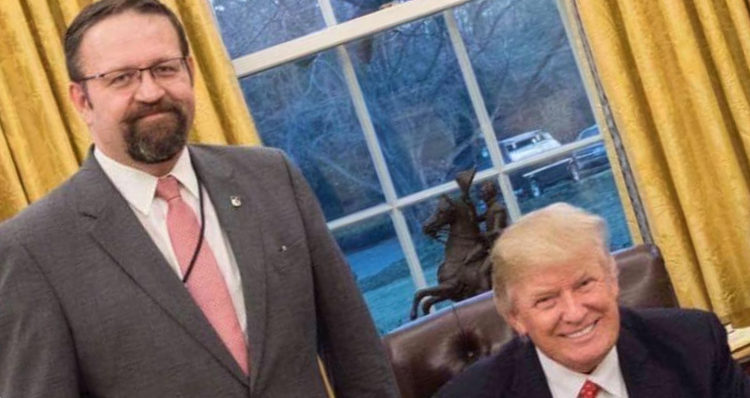 The Anne Frank Center calls for his resignation, and 3 Democratic Senators are calling for an investigation of Trump advisor Sebastian Gorka after reports surface of his ties to a neo-Nazi group.

Three Democratic Senators are calling for an investigation of senior White House counterterrorism advisor Dr. Sebastian Gork in the wake of allegations that he may have falsified his U.S. naturalization application to cover his ties to a Neo-Nazi group.

Last Friday, Senators Ben Cardin (D-Md.), Dick Durbin (D-Ill.) and Richard Blumenthal (D-Conn.) sent a letter to the Departments of Homeland Security and Justice demanding they investigate whether Gorka falsified his U.S. naturalization application by failing to disclose his membership in a Hungarian Neo-Nazi organization. (Gorka is of Hungarian ancestry and was born and grew up in the United Kingdom.)

“We note that this Administration has expressed a special interest in ensuring that those with extremist views do not exploit our immigration laws,” the senators wrote. “We are deeply concerned by reports that Dr. Gorka concealed the material fact of his membership in the Vitézi Rend, a far-right anti-Semitic Hungarian organization, when he applied for U.S. citizenship.”

The Senators cited an article from the American-Jewish newspaper Forward from last Thursday, reporting on Gork’s connection to the group:

Sebastian Gorka, President Trump’s top counter-terrorism adviser, is a formal member of a Hungarian far-right group that is listed by the U.S. State Department as having been “under the direction of the Nazi Government of Germany” during World War II, leaders of the organization have told the Forward.

The elite order, known as the Vitézi Rend, was established as a loyalist group by Admiral Miklos Horthy, who ruled Hungary as a staunch nationalist from 1920 to October 1944. A self-confessed anti-Semite, Horthy imposed restrictive Jewish laws prior to World War II and collaborated with Hitler during the conflict. His cooperation with the Nazi regime included the deportation of hundreds of thousands of Jews into Nazi hands.

The Telegraph reports that Gorka has denied accusations that his ties to a Hungarian group linked to the Nazis are evidence of anti-Semitic views, as calls mount for his resignation. However, The Atlantic reports that “Gorka wore a medal typically worn by Vitézi Rend members to a January 20 inauguration ball, but said at the time that it was a gesture honoring his late father. He has also at times referred to himself as Sebastian L. v. Gorka, using a ‘v.’ initial employed by Vitézi Rend members.”

The Telegraph goes on to note that “Critics have seized on the fact that his mother translated Hungarian documents for David Irving’s book on the 1956 uprising – several years before he publicly denied the Holocaust.”

USA Today reports that “the Anne Frank Center for Mutual Respect, which has been critical of the Trump administration, said Gorka should resign or be fired.”

“Sebastian Gorka must resign — and President Trump must make it happen,” executive director Steven Goldstein said in a statement. “That Sebastian cannot even deny he has links with a Nazi-affiliated organization is symptomatic of the grotesque anti-Semitism that has infected the White House. How many ducks in the Trump White House must walk, talk and quack anti-Semitically before our country wakes up and sees the problem?”

“The only reason he’s anywhere near the White House is Steve Bannon, his old boss at Breitbart, who has his own troubling associations with anti-Semitism,” he said. “It’s time for President Trump to take on anti-Semitism within the ranks of his administration and clean house.”

Noting his connection to Bannon, The Atlantic went a step further and questioned whether Gorka has been properly vetted.

One answer is that he had friends in high places. Gorka was previously national-security editor at Breitbart, whose former CEO Steve Bannon is now President Trump’s top strategist. His views on Islam also closely align with those of the president and many of his top aides. They are, however, far outside the mainstream of scholarship of terrorism and Islam, and experts in the field view his qualifications as questionable.

Another answer is that Gorka didn’t entirely make it through the vetting process. The Associated Press reported in February that he did not have appropriate security clearance for his work, and it’s not clear that he has any clearance at all.