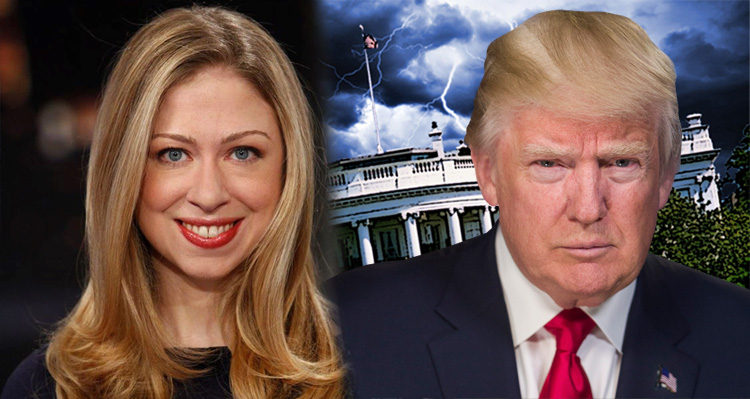 Chelsea Clinton led the criticism as Twitter erupted in outrage over his suggestion that the Civil War could have been avoided had slave-owner Andrew Jackson been in office at the time.

Trump sat down for an interview for the SiriusXM show “Main Street Meets The Beltway” on Sunday. The interview, which was conducted by the Washington Examiner‘s Salena Zito, is set to air Monday at 2pm Eastern; but portions of it have already been released.

As Zito writes in an accompanying article: “Now, as an exclusive conversation with the Washington Examiner begins, the words, the tone, the messages are vintage Trump: All the familiar superlatives, the choppy sentences, the insistence that his first 100 days have been the best of any president.”

During the interview Trump questioned why the Civil War had not been avoided, positing that President Andrew Jackson would have prevented the war had he been in office “a little later.”

Why couldn’t we all just get along?

That’s what President Trump wants to know about the Civil War. In an interview with the Washington Examiner’s Salena Zito, our president-historian posits that the war might not have happened if only Andrew Jackson had still been around. The whole thing apparently could have been avoided if only we had a bona fide negotiator — someone more up to the task than Low Energy Abe Lincoln.

Here is the actual exchange, the relevant portion begins at the :50 second mark.

"Had Andrew Jackson been a little bit later, you wouldn’t have had the Civil War" @realDonaldTrump told @SalenaZito. Full intv at 2pE, Ch124 pic.twitter.com/d7PuRRm7Md

ZITO: Oh, that’s right. You were in Tennessee.

TRUMP: I mean, had Andrew Jackson been a little later, you wouldn’t have had the Civil War. He was a very tough person, but he had a big heart. And he was really angry that — he saw what was happening with regard to the Civil War. He said, “There’s no reason for this.” People don’t realize, you know, the Civil War — if you think about it, why? People don’t ask that question, but why was there the Civil War? Why could that one not have been worked out?

As the Mirror reports, the blow back was swift. “

Trump sparked outrage today by asking why the American Civil War, which led to the abolition of slavery in the southern states couldn’t have been ‘worked out.’

And he suggested President Andrew Jackson, who was a slave owning plantation master before being elected in 1829, would have found some middle ground and prevented the war entirely.

The Washington Post had a similar response, writing: “One glaring issue here: Jackson wasn’t really angry about what was happening with the Civil War, because he died more than a decade (1845) before it started (1861). (Jackson in 1832 and 1833 oversaw the Nullification Crisis, in which Jackson used the threat of military force to make South Carolina pay tariffs. The situation was eventually resolved but is viewed as a precursor to the Civil War.)”

“There is a clear lack of understanding of the history of this country and particularly of matters related to race and civil rights and the Civil War,” Steele said.

President Trump doesn't understand why there was a Civil War.

It's because my ancestors and millions of others were enslaved. https://t.co/dFjpbp1pUy

I'm not saying this to be funny. I truly believe #Trump would flunk the US Citizenship history test. I don't think he would even come close.

Because of slavery, @POTUS. And how could Andrew Jackson have avoided the Civil War? Why do we keep needing to revisit basic history? https://t.co/glQA9r1NAA

Others responded by offering their historic take on the subject:

To be fair to @POTUS if Andrew Jackson HAD served later there WOULDN'T have been a Civil War because he was a slave owner who loved slavery.

If Andrew Jackson had been a little later, and been from planet Krypton, he could’ve stopped the civil war with laser beam eyes.