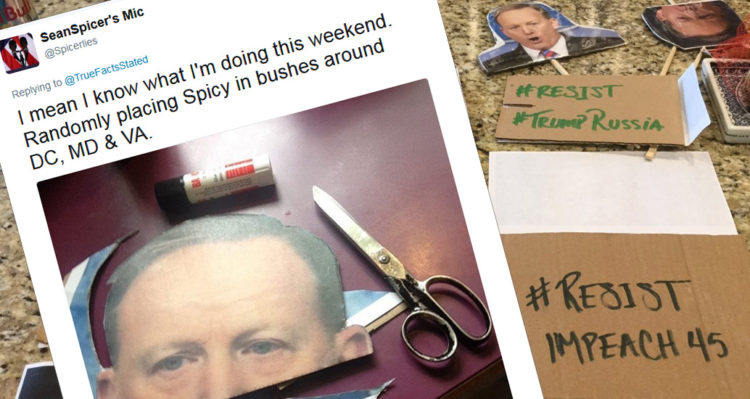 “Garden Spicer” Sean Spicer cutouts are popping up in bushes and hedges nationwide after he hid in a White House hedge to avoid reporters last Tuesday.

According to The Washington Post: “Spicer wrapped up his brief interview with Fox Business from the White House grounds late Tuesday night and then disappeared into the shadows, huddling with his staff behind a tall hedge.”

Continuing, The Washington Post added that: “After Spicer spent several minutes hidden in the bushes behind these sets, Janet Montesi, an executive assistant in the press office, emerged and told reporters that Spicer would answer some questions, as long as he was not filmed doing so. Spicer then emerged.”

In the wake of his insane maneuver, social media has been exploding with accounts of people placing Spicer cutouts in bushes and hedges from coast to coast.

As The Hill reports, an Ontario resident seems to have kicked off the affair by posting photos of Spicer cutouts on her Facebook profile last Wednesday.

“Presenting the ‘Garden Spicer.’ Here’s something I made this afternoon. Now you too can have the White House press secretary in — or rather, ‘among’* — the bushes in your yard. And hey, if you’re concerned that when exposed to the outdoors, the image will run ….no worries, that’s exactly what Sean Spicer does, so it’s totally authentic!” she wrote.

BuzzFeed News reporter Julia Reinstein tweeted the next day that “Some actually made Sean Spicer lawn ornaments you can put in your bushes.”

Some actually made Sean Spicer lawn ornaments you can put in your bushes pic.twitter.com/vTdc4jFOst

Former Clinton White House staffer Claude Taylor tweeted “I got a report from inside WH that Trump is so freaked out by SNL’s coverage-they’ve had senior staff meetings on how to pushback. Delish.” prompting a response from Twitter user SeanSpicer Lies:

“I mean I know what I’m doing this weekend. Randomly placing Spicy in bushes around DC, MD & VA.”

@TrueFactsStated I mean I know what I'm doing this weekend. Randomly placing Spicy in bushes around DC, MD & VA. pic.twitter.com/8uHycwgyjr

SeanSpicer Lies tweeted a series of photos with the one below being a personal favorite of ours and an early fave of SeanSpicer Lies:

@birdflyoverlake @TrueFactsStated This one is my favorite so far. I purposefully installed it low so dogs would pee on it 😂🙈😂 pic.twitter.com/nQgidqpzqF

Meanwhile, The Independent and other news outlets report that Spicer’s job as White House Press Secretary may be in jeopardy over his handling of the James Comey firing.

A White House official told CNN Ms Sanders’ performances, which have already garnered praise, would be closely monitored by those in the highest tiers of the administration. Another source said the big question is whether his time on the bench is temporary or permanent.

Hilariously, The Independent goes on to report that The Washington Post updated their initial story about the “Garden Spice” incident in the wake of White House concerns, reporting:

A White House official has now taken issue with the exact details of Mr Spicer’s whereabouts when he retreated to a nearby hedge. As such the initial Washington Post story, a colourful descriptive piece, has been amended to reflect that Mr Spicer was hiding “among” the bushes rather than “in the bushes”.

Time will tell whether Spice becomes the next person tossed from the Trump administration, but in the meantime – the laughs are on him!