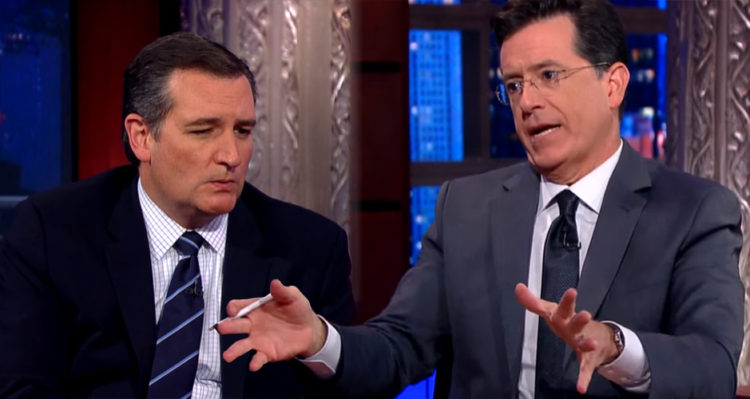 Stephen Colbert confronts Ted Cruz about his hypocrisy and lies regarding his hero Ronald Reagan, taxes and immigration.

Everyone is talking about Senator Ted Cruz (R-TX) these days in the wake of recent interviews with Senator Al Franken (D-MN) that touched upon his true feelings regarding the Tea Party favorite.

Franken has been working the interview circuit promoting his latest book,  “Al Franken: Giant of the Senate,” which he devotes an entire chapter called “Sophistry” to Cruz.

During a Wednesday interview on CNN’s “Newsday,” Franken inspired CNN co-host Alisyn Camerota and other CNN staff off-camera to laugh out loud when he joked about how much he hates Cruz.

“I probably like Ted Cruz more than most of my colleagues like Ted Cruz, and I hate Ted Cruz,” Franken said, adding “and I make an exception with him because he is a toxic coworker, and to get anything done in the Senate, you’ve got to be collegial. You’re a small town of 100 people. Ted doesn’t get anything done. His big accomplishment was shutting down the government.”

Back in September of 2015, late night host Stephen Colbert confronted Cruz face-to-face, ripping him first over the ideological divide between Cruz’s political beliefs and those of his professed hero – Ronald Reagan, who – Colbert aptly pointed out – would not be supported by the modern Republican Party.

Let me ask about Reagan for a second. Reagan raised taxes, okay. Reagan actually had an amnesty program for illegal immigrants. Neither of those things would allow Reagan to be nominated today. So to what level can you truly emulate Ronald Reagan?

After some cross-talk, Colbert blasted Cruz for his near-fanatical obsession with tax cuts and bigotry directed at immigrants:

“Could you agree with Reagan on those two things, raising taxes and amnesty for illegal immigrants?” Colbert began.

“No, of course not,” Cruz replied, adding “but Ronald Reagan also signed the largest tax cut in history. He reduced government regulations from Washington and economic growth exploded.”

Colbert continued to push, pointing out that Reagan ultimately reversed course and rolled back those tax cuts:

But when conditions changed in the country, he reversed his world’s largest tax cut and raised taxes when revenues did not match the expectations, so it’s a matter of compromising.

Cruz opened the door to the subject of same-sex marriage when he declared that he is fighting for the United States to “follow the Constitution,” to which Colbert responded: “and no gay marriage.”

At this point the audience began to boo Cruz, prompting Colbert to respond: “guys, however you feel, he’s my guest so please don’t boo him.”