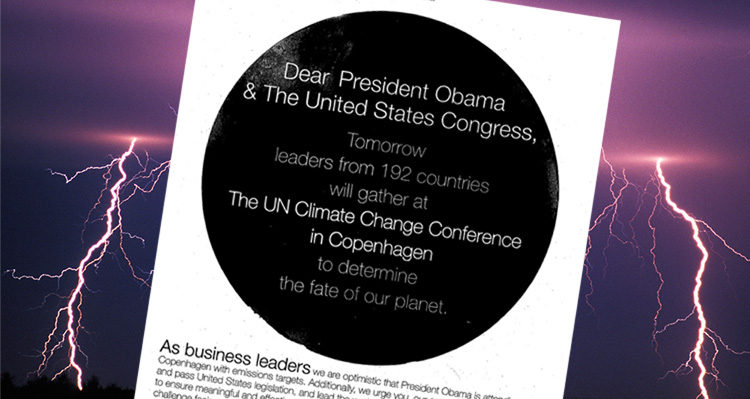 “Will President Trump heed his own advice?” Carper, the ranking member of the Senate Environment Committee, asked.

#TBT to 2009 when Donald Trump urged President Obama to lead the world by example & #ActOnClimate. Will President Trump heed his own advice? pic.twitter.com/ypjAJi4GpB

In the open letter, which appeared as a full-page advertisement in a 2009 edition of The New York Times, Trump and other business leaders urge then-President Obama to enact climate legislation, invest in clean energy projects, and lead the world in combating climate change.

The open letter, addressed to “President Obama & The United States Congress,” was published in December of 2009, the day before “leaders from 192 countries” gathered “at the UN Climate Change Conference in Copenhagen to determine the fate of our planet.”

The letter began by urging Pres. Obama and Congress to “lead the world by example” by strengthening legislation combating climate change.

As business leaders we are optimistic that President Obama is attending Copenhagen with emissions targets. Additionally, we urge you, our government, to strengthen and pass United States legislation, and lead the world by example. We support your effort to ensure meaningful and effective measures to control climate change, an immediate challenge facing the United States and the world today. Please don’t postpone the earth. If we fail to act now, it is scientifically irrefutable that there will be catastrophic and irreversible consequences for humanity and our planet.

The letter also spoke of the key role that clean energy will play in “stimulating” the global economy, spurring economic growth and increasing energy security “while reducing the harmful emissions that are putting our planet at risk.”

We recognize the key role that American innovation and leadership play in stimulating the worldwide economy. Investing in Clean Energy Economy will drive state-of-the-art technologies that will spur economic growth, create new energy jobs, and increase our energy security all while reducing the harmful emissions that are putting our planet at risk. We have the ability and the know-how to lead the world in clean energy technology to thrive in a global market and economy. But we must embrace the challenge today to ensure that future generations are left with a safe planet and a strong economy.

The letter concluded with the following plea: “Please allow us, the United States of America, to serve in modeling the change necessary to protect humanity and our planet.”

Donald Trump as well as three adult children at the time were listed as signatories, as Sen. Harper noted in red on his tweet.

As The Hill reported in June 2016, the letter is “an urgent push for the exact opposite policies that Trump, the presumptive Republican nominee for president, has endorsed throughout his campaign.”

In his presidential run, Trump has said he is “not a big believer in man-made climate change.” He’s pledged to repeal Obama’s actions and regulations to reduce greenhouse gases and to pull the United States out of the Paris climate change agreement — the result of the 2009 talks in Copenhagen.

Indeed, on June 1, 2017 Trump issued a statement at the White House Rose Garden announcing his decision to withdraw from the Paris Climate Accord.

You can click here to see a larger photograph of the open-letter.