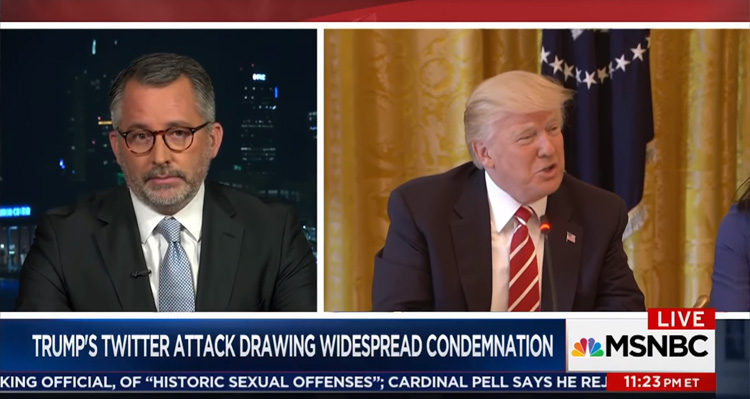 Florida Republican and former member of Congress David Jolly blasts Donald Trump for his attacks on MSNBC host Mika Brzezinski, saying he’s ‘looking for leadership’ within the GOP not this.

Controversy continues to rage in the wake of Trump’s latest Twitter Tantrum targeting a woman.

Thursday morning, Trump lashed out at the hosts of MSNBC’s “Morning Joe,” tweeting:

Asked by NBC’s Brian Williams how he feels as a “former, yet proud Republican office-holder, former Rep. David Jolly of Florida stated he found the Twitter tantrum to be “heartbreaking, ” that “many of us are still looking for answers and looking for leadership within Republican Party. But listen – Hill Republicans are answering to the same base that Donald Trump is, the same voters, and that’s why nothing will change today.”

Continuing, he stated that: “Trump is a man with hate in his heart, a small and weak man with a special type of cruelty to insult a woman on the world’s stage over her appearance,” adding that “he owes Mika Brzezinski an apology, but he’s not going to do it.”

Concluding, Jolly told Williams that “we can’t overlook the fact that Donald Trump tonight is the face of the Republican Party. The party that once proudly boasted of Lincoln and Ike and TR [Teddy Roosevelt] and Reagan and the Bushes is now represented by a man who… insults women and war heroes and immigrants and the disabled. And, as that is Donald Trump, that is today’s Republican Party.”