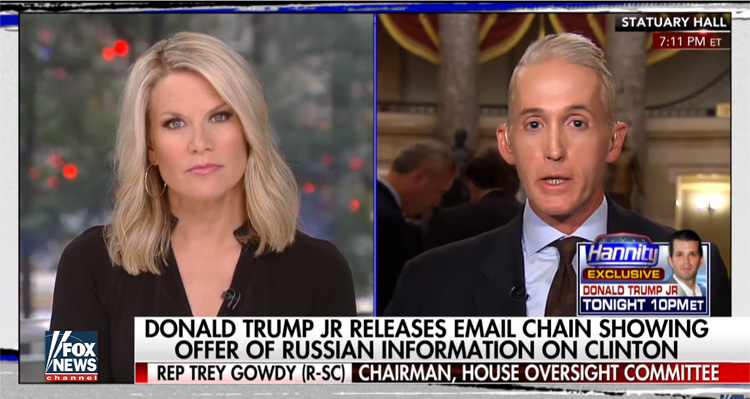 Trey Gowdy delivered a strong rebuke and warning to the Trump administration during a Tuesday evening interview on Fox News.

Republican Rep. Trey Gowdy of South Carolina lashed out at the Trump administration in the wake of stunning revelations that Donald Trump, Jr. and two senior members of the Trump campaign met with a Kremlin-connected attorney in Trump Tower on June 9, 2016.

Speaking to Fox News, Gowdy – the chair of the House Oversight Committee – sarcastically suggested that members of the Trump administration suffered from “amnesia.”

Asked about his concerns, Gowdy said that he had three concerns: the legal issues, the political issues, “and then the third – which is more of a medical issue – is the amnesia of people that are in the Trump orbit.”

“Someone close to the president needs to get everyone connected with that campaign in a room and say, ‘from the time you saw Dr. Zhivago until the moment you drank vodka with a guy named Boris, you list every single one of those, and we are going to turn them over to the special counsel, because this drip drip drip is undermining the credibility of this administration.”

Asked about the Magnitsky Act, Gowdy said that he was much more concerned about the “purported reason for the meeting as opposed to the real reason.”

“The purported reason was for an agent of a foreign power to try to influence our election,” he said, adding: “That concerns me more than someone trying to sit down with a member of perhaps an incoming administration to lobby for a policy change.”

“I’m much more concerned with the words in the email than the reason she [the Russian attorney] wanted to meet.”