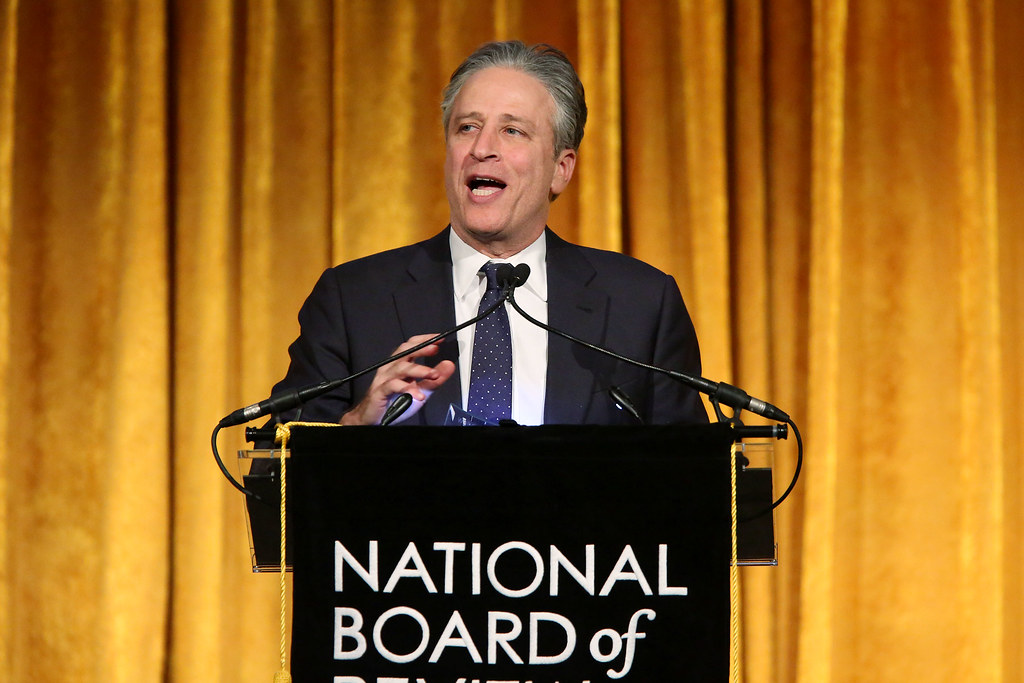 Jon Stewart gives his own response to the resurgence of white supremacy during fiery surprise stand-up performance.

Liberals Unite recently reported that Jon Stewart will be returning to stand-up for the first time since HBO’s Jon Stewart: Unleavened was aired in 1996, although the date and location of his two upcoming HBO comedy specials have yet to be determined.

Vanity Fair reported last week that Stewart “made a surprise appearance at Dave Chappelle’s show at Radio City Music Hall” last Thursday debuting “some scathing material about white supremacists,” giving “eager fans an idea of what [those] comedy specials might be like.

Writing of his appearance, Salon reports that “Longtime fans of The Daily Show have been itching to hear former host Jon Stewart’s take on Trump’s recent stumbles,” and last week “they got an earful” when Stewart “addressed the Charlottesville riots and slammed Trump for his pitiful response to the deadly violence there.”

Sopan Deb, culture reporter for the New York Times, attended the show and was kind enough to transcribe part of Stewart’s remarks, sharing them on Twitter in a three part tweet. Part one is below and you can check out part two here and part three here.

1st part of what Stewart had to say tonight: "It wasn’t so much that there were Nazis. It was really the reaction by certain presidents." pic.twitter.com/77LjBsDH1y

“What Dave [Chappelle] has put together here with music and words and art is a power that can extinguish a Tiki torch,” Stewart began, referencing the Charlottesville rally.

Strange, strange times. I have to admit, I did not think – It wasn’t so much that there were Nazis. It was really the reaction by certain presidents.

Turning his attention to Trump’s response to the rally, Stewart said “I knew it would be bad because – and in the president’s defense – he is a terrible person…. I don’t think everybody who likes him is a Nazi, but everybody who is a Nazi sure does seem to like him.”

Stewart went on to discuss a past Twitter feud he had with Trump where he questioned Stewart’s name change from Jonathan Leibowitz.

Four years ago I come into the office one morning and I walk in and somebody say to me, “Dude, did you see what Trump tweeted about you?” And I was trying to be cool, so I was like “fuck yeah!” So he tweeted, “If Jon Leibowitz is so above it all, why did he change his name?” Basically saying to people – “just so you know, he’s a Jew.” … So basically it goes back to an old white supremacist trope which is “Jews amongst us.” The crypto-Jew. So what Donald Trump was saying was – he was signaling to the underworld that Jews are amongst us and one of them has a show on Comedy Central. How about that? And honestly, if Jews controlled the media, why wasn’t I on a network?

…So I get on the Comedy Central Twitter and I tweet back: “Did you know Donald Trump’s real name is Fuckface Von Clownstick?” I don’t know why he’s running away from the Von Clownstick heritage.

Continuing, Stewart turned his attention to Trump’s election, contrasting it with that of President Barack Obama:

The point is – people keep saying to me, like “how did this happen? How did we elect Donald Trump president of the United States?” And my feeling is have you met us? Every president we’ve had except one has at least some of the characteristics. We’ve had racist presidents, that’s for fucking sure. We’ve had rich presidents. We’ve had presidents that are kind of assholes. Pretty much every component that goes into Donald Trump we have experienced as the American public.

We’re some dumb motherfuckers sometimes. Here’s the real truth: it’s not a surprise in the United States of America that we elected Donald Trump president. The truth is that it’s a surprise that we ever elected Barack Obama president of the United States because that is where we rose above our history. Barack Obama was elected in America. Barack Hussein Obama – a man with not one name that sounds natural to the American ear. Barack – sounds like the first word of every Jewish prayer. Hussein! The last name of the dictator in Iraq we are at war with. His last name Obama rhymes with Osama – the terrorist who knocked down the Trade Center. That man got elected president of the United States of America. You don’t understand how historic. It would be like World War II if Franklin Roosevelt lost a presidential election to Gandolf Shitler. Like, do you get it?

Stewart concluded his show mocking white supremacists for thinking they are part of the “master race.”

Everybody likes a good Shitler joke. White supremacists, man. I don’t know what to tell you. It’s a free market. If you guys feel like you’re losing out, fucking work harder. I don’t know what to tell you. If you’re a white supremacist, if you think you’re the master race, how come we’re kicking your ass so easily? You’re the master race! How come you’re not winning everything? Why aren’t the Olympics dominated by you? You’re the master race. What do you still have left? Golf and tennis, maybe? Maybe? And even then, the first black people you come across, you’re like “We can’t play this game anymore.” Williams sisters, Tiger Woods? Okay.