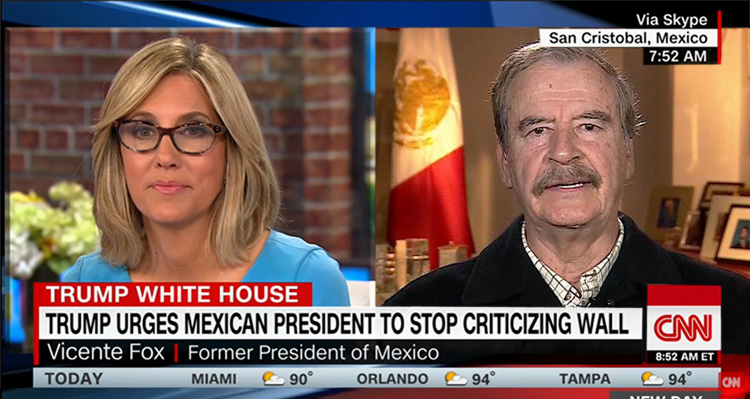 Vicente Fox doesn’t hold back when it comes to Trump and his continued threats to build a border wall between the USA and Mexico.

Last week he took to Twitter on several occasions to Mock Trump.

For instance, Trump started a 17-day vacation on Friday, and Fox posted a tweet the same day suggesting Trump make it permanent.

Last week, he posted a tweet using colorful language, telling Trump that Mexico is not going to pay for his ‘f-ing’ wall.

“@realDonaldTrump once again I tell you: we’re not paying for the #FuckingWall! Don’t try use us for your own good.”

Camerota asked Fox if he thought the current Mexican President, Enrique Pena Nieto, was forceful enough in his January conversation with Trump.

“Do you think the president of Mexico should have been more forceful in saying it’s never going to happen?” she asked in regards to whether Mexico would ever pay for Trump’s beloved border wall.

“You can use my words: We’ll never pay for that f–ing wall,” Fox said.

Continuing, he added: “Who can think of a country paying for a wall that is going to be built in the neighbor’s territory? Why should Mexico pay for a wall? What’s the reason? We don’t need a wall.”

Immediately, Camerota’s face dropped, and for the remainder of time Fox spoke, kept her lips pursed. As soon as Fox was done answering her question, she said, “I apologize to our morning audience for the salty language this morning. Perhaps I should have taken that offer for the five-second delay.”