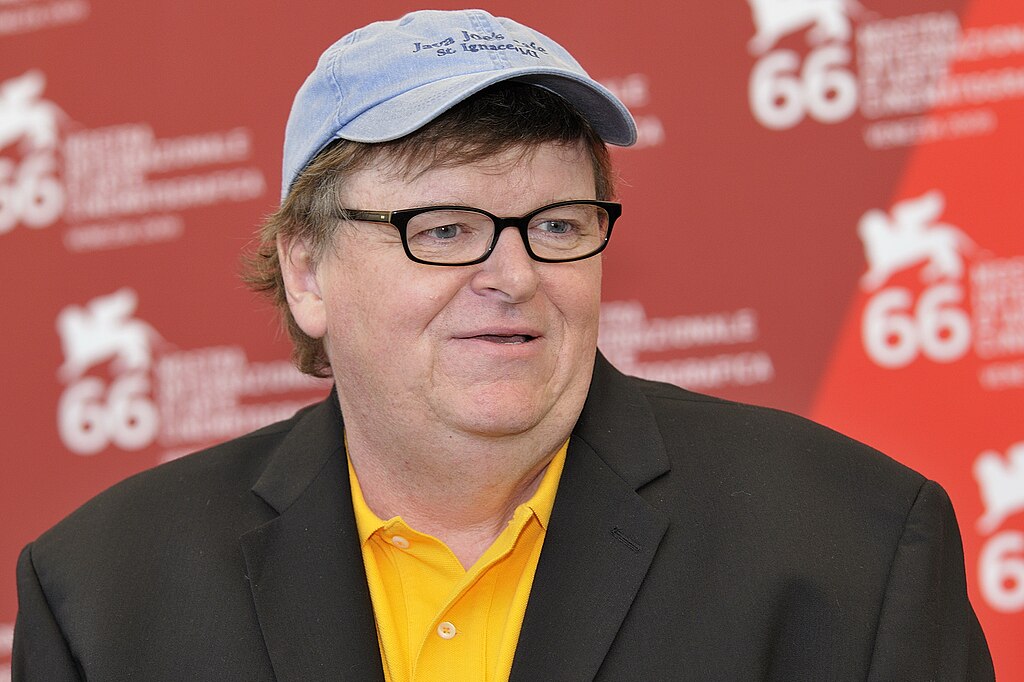 Filmmaker and author Michael Moore is as well known for his political activism as he is for his documentary films.

As The Sun Sentinel reported in 2007, “Moore rejects the label ‘political activist;’ as a citizen of a democracy, he insists, such a description is redundant.”

“I and you and everyone else has to be a political activist. If we’re not politically active, it ceases to be a democracy.”

As a filmmaker Moore has taken on a wide array of topics in his eleven documentaries to include the American healthcare system, George W. Bush’s “war on terror,” and Trump’s rise to power in his latest film “Michael Moore in Trumpland.”

Moore is perhaps best known for his 2002 film “Bowling for Columbine,” which examined the causes of the Columbine High School massacre.

An avid user of Twitter, Moore took to his page on June 19, 2015 in the wake of the tragic Charleston church shooting, where nine people were killed by domestic terrorist Dylann Roof, a 21-year-old white supremacist.

“One proud White American, in less than 2 minutes, has killed TWICE as many Americans as ISIS has in 2 years. White Terrorists. #WISIS,” he tweeted.

One proud White American, in less than 2 minutes, has killed TWICE as many Americans as ISIS has in 2 years. White Terrorists. #WISIS.

Sadly, Moore’s words are more relevant than ever in the wake of recent tragedies such as the one that occurred in Charlottesville last month and Trump’s failure to address the growing problem of white terrorism.

Turning his attention to Charlottesville, Moore posted the following poignant tweet last month: “There was a head of state who condemned the Nazis of Charlottesville yesterday — the leader of Germany, Angela Merkel.”

There was a head of state who condemned the Nazis of Charlottesville yesterday — the leader of Germany, Angela Merkel.

As The Independent reported last month, “Michael Moore has arguably performed one of the most genuinely immersive pieces of theater” in recent memory when he bused the entire audience from his one-man Broadway show, “The Terms of My Surrender,” to Trump Tower to protest Trump’s controversial response to the Charlottesville tragedy.

The theater-goers made the 12-block trip to Trump Tower just hours after Mr Trump prompted outrage for his press conference responding to the Charlottesville violence in the lobby of Trump Tower.

Addressing the clashes which erupted in the Virginia city over the weekend,  [Trump] drew a moral equivalence between white supremacists and anti-fascists, saying counter-protesters were as violent as the KKK and neo-Nazi protesters and the “alt-right” groups included some “very fine” people.

There are a good number of anti-gun violence organizations in this country, such as Moms Demand Action For Gun Sense In America and The Coalition To Stop Gun Violence, that you can visit for more information or to offer your support.

Thank you, Michael Moore, for your tireless efforts to shed light on the injustices in our country, and we look forward to more from you in the future.