The War On American Women Is Rapidly Escalating: Fight Or Get The F*** Out Of The Way

October 16, 2017 by Kimberley Johnson No Comments 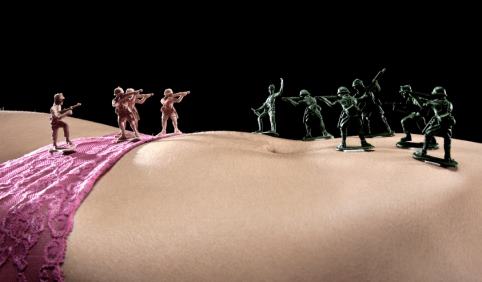 American women have been sold a steaming bag of human waste, and we’ve been told we were lucky to get it. Adding insult to injury, we’re told that women in other countries don’t even have a bag of human waste to be grateful for.

Aren’t we lucky? (I ask sardonically.)

We’ve been told we live in a free country where men and women have equal rights. Not true. We don’t. This falsehood has been rammed down our collective throats so much and so often, it’s widely accepted as reality. Women are not mentioned in the Constitution, and no one is protected against gender discrimination — something women experience to a greater degree than men. It’s worse for women of color.

Ronan Farrow’s explosive exposé on Hollywood producer Harvey Weinstein’s decades of rampant sexual misconduct (everything from basic sexism, to predatory behavior and accusations of rape) has created a firestorm among feminists and thrown a substantial new log on the already raging fire known as the the War on Women. When actress Rose McGowan had the audacity to be an outspoken woman on Twitter and called out Weinstein — as well as Ben Affleck — for their roles in Hollywood misogyny, Twitter suspended her account.

Parts Unknown host Anthony Bourdain came to McGowan’s defense regarding Weinstein, but he quickly changed the narrative by pissing and moaning that Hillary Clinton’s commentary on the issue was disappointing to him. Poor fucking Bourdain was disappointed in HILLARY — who’s NOT THE PRESIDENT, holds no public office, and has been told to go away. And sadly, Bourdain isn’t the only man whining about Clinton’s response.

Misogynists on the left and the right immediately pounced on Clinton when the Weinstein news broke — as if it were all her fault. As if anything she would have ever said would have changed a damn thing. More than likely, her warnings would’ve been either ignored or she would’ve been painted once again as a hysterical man-hater, and then it would be all about her husband — because it always is. How can I make this assertion, you ask? See the 2016 general election. See how she was ignored when she warned voters and the world about Donald Trump. See how she was ignored when she warned about Russia attacking our democracy, and see how she was ignored and treated as if she were a criminal because she had the gall to run for president while having a vagina. I know, I know, the defiant mob will insist any other Democratic woman would have been a better candidate, but that’s what they’ll say about the next Democratic woman who runs.

The time for polite messaging and activism is over. Humor will always be a necessary component in an effort to change hearts and minds, but what’s happening isn’t funny. The rights of American women are rolling backward; and too many “good” American men are dangerously complicit. Whether it’s the loss of reproductive freedom, the ongoing and false narrative that the gender wage gap is a myth, or the fact that women are ridiculed and slut-shamed when they expose sexual predators, we are seeing decades of hard-won advances lost to a culture of misogyny unleashed by a president who bragged about assaulting women. The irony is that women aren’t the only ones who lose. Everyone loses.

Action shouldn’t be based on whether or not a man knows and loves a woman who’s being affected; it should be based on the simple notion that women are human and therefore equal.

If you’re a “good” man reading this and you’re insulted — get over yourself and recognize this isn’t all about YOU. No one cares if your delicate ego is bruised. American men and even some incredibly misogynistic women (Betsy Devos, Kellyanne Conway, Ivanka Trump, to name a few) are abusing American women. Our lives are literally at stake, so stop your complaining and join us. Stand UP with us so we can reverse this abuse.

If you’re one of those “good” men who makes “just kidding” sexist jokes and then condescendingly demands a woman to “relax” when she calls you out, you’re the problem.

If you change the narrative to criticize Hillary Clinton (or any woman) for the actions of a sexist, violent, predatory man, you’re the problem.

If you’re a man who offers unsolicited advice to women because you assume you know more, you’re a mansplainer (yes, you are) and you’re the problem.

If you believe men are simply acting on primal desires when they rape, you’re the problem.

If you grab a person’s body part without consent, you’re guilty of assault and you’re part of the problem, and possibly the president of the United States.

If you’re a black or brown or white man who benefits from patriarchy but does nothing to fight it, you’re the problem.

If you’re outraged at the men and women who allow these behaviors and actions to continue, join us. We need you to be vocal and to risk being uncomfortable by speaking out, and speaking often. This is a War on Women and the fight is on!

This article originally appeared on HuffPost.