November 6, 2017 by Samuel Warde No Comments 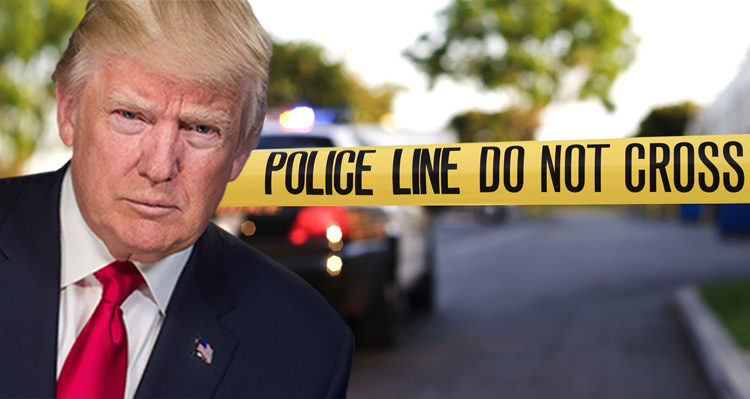 As NBC News reported, about half of the people killed in the Texas church shooting were children.

Twenty-six people were shot dead during the Sunday massacre at First Baptist Church in Sutherland Springs, a small, tight-knit town about 30 miles outside of San Antonio. Of them, 12 to 14 were kids, according to Wilson County Sheriff Joe Tackitt.

Trump answered questions about the shooting during a Monday press conference in Tokyo, telling reports that it was “a little bit soon” to be talking about gun control adding that the shooting was a “mental health” issue and not a “guns situation.”

I think that mental health is your problem here. This was a very — based on preliminary reports — very deranged individual. A lot of problems over a long period of time. We have a lot of mental health problems in our country, as do other countries.

Fair enough… clearly, mental health has played a role in many of the mass shootings that are currently plaguing the nation. But here’s where Trump’s hypocrisy comes into play. As USA Today reported on February 28, 2017 Trump signed a bill reversing an executive order by his predecessor, Barack Obama, that banned gun purchases by the mentally ill.

The rule was implemented shortly after the tragic San Bernardino shootings in 2015, which left 14 people dead and 22 seriously injured.

The Obama administration rule required the Social Security Administration to submit records of mentally disabled people to the National Instant Criminal Background Check System, the FBI database used to determine whether someone can buy a firearm under the 1993 Brady Bill.

However, the real kicker is the anticipated impact of the rule:

The rule would have applied to about 75,000 people who were “adjudicated as a mental defective” and who had applied for Social Security benefits, and had a mechanism to notify those affected so they could appeal. But congressional Republicans said the rule could ensnare people who had mental health issues but otherwise were competent to own a gun.

USA Today reported the following, at the time the bill was passed in the Senate:

“If the regulation is not repealed, it will allow the agency to very unfairly deprive Social Security recipients of their Second Amendment rights,” Senate Judiciary Chairman Chuck Grassley of Iowa, the resolution’s sponsor, said during Tuesday’s debate on the measure.

A separate article by USA Today reported the following from the House of Representatives:

“This is a slap in the face for those in the disabled community because it paints all those who suffer from mental disorders with the same broad brush,” said House Judiciary Chairman Bob Goodlatte, R-Va. “It assumes that simply because an individual suffers from a mental condition, that individual is unfit to exercise his or her Second Amendment rights.”

Democrats in both the House and Senate unsuccessfully tried to counter those arguments, while agreeing that those suffering from mental illness shouldn’t be stigmatized.

“These are not just people having a bad day. These are not people simply suffering from depression or anxiety. These are people with a severe mental illness who can’t hold any kind of job or make any decisions about their affairs. So the law says very clearly they shouldn’t have a firearm.” ~ Rep. Mike Thompson (D-CA)

“This is not a situation where the Social Security Administration would notify NICS just because a person can’t balance his checkbook. There must be a seriously debilitating, medically diagnosed mental illness involved.” ~ Sen Dick Durbin (D-IL)